Toledo was excited to be the first team to beat Michigan at the Big House.  A little too excited actually.  In fact, 2 starters for Toledo in WR Nick Moore and DE Albertson Alexandre were arrested after a bar brawl 2:30 AM that Saturday night.  Yes the same Nick Moore that had 20, count 'em 20 catches against Michigan! 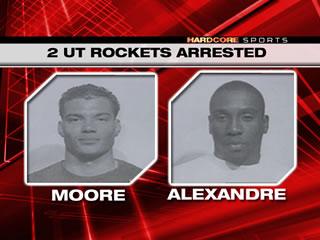 The Toledo Blade reports that this was no ordinary bar fight, but an all-out brawl last Saturday night

According to the police report, when police arrived, they deployed mace to disperse a crowd of 30-40 people.

Alexandre, a junior from Miami, repeatedly approached the officers, ignoring numerous commands to leave the area, according to the report. After approaching an officer and tapping his firearm while trying to get his attention, Alexandre was taken into custody, according to police.

The students at Toledo obviously weren't too happy about the incident

Students like Albert Fayne are embarrassed.  "I guess it is a big deal", Fayne says. "You know, the captain of the football team gets arrested for fighting when they're supposed to be leaders of the campus".

Moore was arrested for disorderly conduct intoxication (minor misdemeanor) and Alexandre was booked for obstruction of official business (2nd degree misdemeanor).  Moore is scheduled to appear in Toledo Municipal Court on Tuesday and Alexandre will appear Oct. 28.

Coach Toledo Tom Amstutz won't start either player, but both will play on Saturday against NIU

"As head coach, it is my judgment that Nick and Albertson violated team rules, and as a result will face team penalties," Amstutz said. "Both players will be held out of the starting lineup this Saturday against Northern Illinois. In addition, they both will face internal team discipline."

I think its ridiculous that both of these players are going to be playing against us Saturday in the homecoming game.  I am fully confident that Coach Kill would have suspended these players for multiple games.  Hopefully all of this distraction plus the possible emotional letdown the Rockets may have after beating the Wolverines helps out the Huskies beat Toledo in Dekalb for the first time since 1989.