"This is for you, Joe Novak"

Share All sharing options for: "This is for you, Joe Novak" 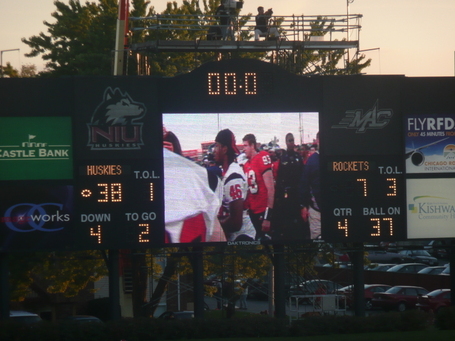 Those were the words that came out of Coach Kill's mouth as he was being interviewed by Comcast after the 38-7 win over the Rockets Saturday.

The quote is fitting in that the current coach was able to exorcise the demons that Coach Joe Novak was never able to get past facing the Rockets over the years.  It is great that Coach Jerry Kill preserves so much of the great tradition that Coach Novak left here.  He is the man that built the foundation that NIU football stands on today.

It's only a matter of time until we reverse the fortune of the Toledo dominance over the years, including Novak's 1-10 record against them.  Coach Kill made sure his team remembered last year's score during practice all of last week.  The revenge from last year's 70-21 painful loss is sweet and hopefully we can keep the good taste in our mouths for a while now.

It feels great to be physically dominating on both sides of the ball and actually beat teams that we are "supposed" to be able to beat.  This victory over Toledo marks a new era in Huskie football and a weight that has been lifted off of our shoulders.  Our next opponent BGSU is one of those other teams that were a thorn in our side back in 2003.  It's them and after that we face a murder's row of MAC West opponents in Ball State on the road and Central Michigan at home.

Star of the game WR Marcus Perez has has been here for a long time and has some thoughts on the state of this team:

"It’s a totally different era," said NIU wide receiver Marcus Perez. "We’re just trying to build this program back to where it was."

Defensive Coordinator Tracy Claeys also has this interesting quote about the upcoming games:

"The sun doesn’t shine on the same dog’s butt every day," Claeys said. "So we’ve got to keep working. If we’re going to get beat I want to get beat because somebody’s better than us, not because we’re not prepared."

I hope the staff works hard this week to prevent a letdown, but I'm pretty confident considering that quote by Claeys. He has been keeping this defense on their toes all season long and I hope it continues.