Share All sharing options for: NIU-BSU: What's at stake?

What do both of these teams want to accomplish?  While Ball State has an outside shot at a BCS game, NIU just wants to stay in the Mid-American Conference race.  Losing this game would all but put the Huskies out of contention with 2 conference losses.  BSU has the huge target on their backs being ranked in the top-20 in the nation at this point.  They have a lot more pressure on their team as they have so much more to lose in this game tomorrow.

2005: I don't know exactly how many Huskies were on the team at the time, but a very strong NIU team came out flat to Ball State and we ended up losing at home 17-31.  That was one of the most frustrating game I have ever been to.  The fans even booed the team at halftime because they thought the team didn't put out much of an effort.

2006: The last time we played in Muncie Garrett Wolfe absolutely owned the Cardinals rushing for a school-record 353 yds on the ground helping NIU beat the Cardinals 40-28.

2007: Unfortunately in our final home game, QB Nate Davis threw for 326 yds and 2 TDs.  135 of those receiving yards came from WR Dante Love, who went down earlier this season with a spinal injury.  It was actually a close game with us only losing 21-27. 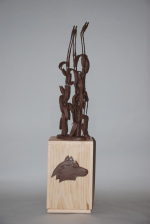 Starting in 2007, Northern Illinois and Ball State started playing for a rivalry trophy in "The Bronze Stalk".  It's great to finally have a rivalry trophy against another team in the MAC and this game is set to send this rivalry to a new level.  It's unique because we are the only MAC team in IL and they are the only MAC team in IN.  NIU was ranked #12 when Bowling Green beat them in 2003.  After that we hated BGSU with a passion.  That was set up to get a great rivalry...until they moved to the MAC East.  If NIU beats the Cardinals, then I'm sure that the fans in Muncie will start to get irritated that we ruined their party and this rivalry will start flourishing.

The following Hoosiers will have something to prove against Balls U:

That's 5 of our best players right there.  They will be playing HARD in front of friends and family.  Along with these solid backups and ST contributors: