NIU as a whole were 7 of 19 (36.8%) shooting free throws.  Patton and I share the same thoughts on this whole fiasco:

"I thought our kids battled most of the night. You can’t shoot 36 percent from the free throw line and beat many teams. We saw where each of the programs are at this point. My only wish is that we continue the series.

"You don’t expect Mike DiNunno to go 2-of-8 from the free throw line. Free throw shooting is about confidence
in my mind."

Dinunno himself tries to find a reason for his poor night shooting:

SIU HC Chris Lowery has confidence in the true freshman:

"That probably won’t ever happen again to him in his career," 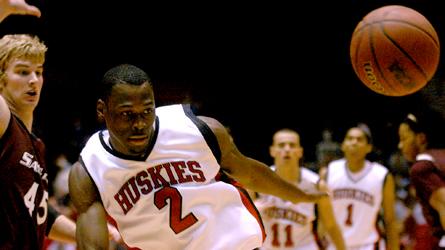 Najul Ervin trying to control the ball with his mind (via images.townnews.com)

We were never ahead in this game and quite frankly let the class of Illinois college basketball walk all over us.  The key to beating the Salukis is to get to the line and make free throws, but that did not get accomplished.  We were also out-rebounded 36-27 but our big men were pulling down the ball from the basket when it was too little too late in the latter part of the game.  Backup F Lee Fisher played only 19 minutes and still grabbed 6 boards.

Sure we forced a total of 17 turnovers from SIU, but we let go of the ball 16 times ourselves.

SIU Coach Chris Lowery had the right plan coming in to this game as Jake Anderson was limited to only 5 of 13 shooting and 12 points, which tied for the most points for the Huskies in this game with Michael Patton.

"Mullins did a great job. Everyone was on Jake [Anderson]. He came in averaging 30.2 points a game so no one guy was on him. We tried to limit his shots. We wanted to make sure we didn’t give Jake open looks. We stressed to put pressure on him every catch and every dribble. "

Maybe we're relying a little too much on Jake Anderson, but then again what other options on offense do we really have?  He is an invaluable player to this year's team, but some other options need to step up...

As for playing SIU again, I'd wait a couple years because playing them at this point is just embarrassing for everyone.  We're just not at their level, but they do provide a tough test getting us ready for conference play.  I'm excited to see what this team can correct for Satuday's showdown against another in-state rival in Loyola Chicago.