Will the real Larry English replacement please stand up?

Share All sharing options for: Will the real Larry English replacement please stand up?

Just over a week ago DE Anthony Wells commited out of North Chicago HS and was deemed "The next Larry English."  Well, there is now another horse in that race now that DE Kyle Jenkins has commited out of JUCO Harper College in Palatine, IL. 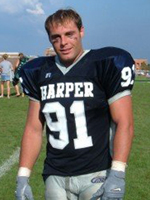 Since he can enroll in the spring he can then count against last year's recruiting class allowing us to offer more scholarship offers this year.  The Driscoll HS product was named Region IV defensive player of the year while racking up 19.5 sacks for the season.  He also had 62 total tackles (40 solo).

His #4 ranked Harper College Hawks defeated the #8 ranked Phoenix College team 39-38 in the Valley of the Sun Bowl Dec. 6th.

And he's got Youtube highlights galore.  Of course these were from 2007 when he only had 7 sacks for the season.  Message to recruits - make sure your highlight vid has an awesome song like this one: TIME TO PLAY THE GAME!!!

All of this is nice, but according to the Daily Chronicle, Jake Coffman and Brandon Bice will do just fine next year filling in for the future NFL OLB/DE.