The Poinsetti...hey, we played in this bowl game

Share All sharing options for: The Poinsetti...hey, we played in this bowl game

It's time to reflect on one of this biggest motivations for this year's upperclassmen as the Independence Bowl nears...

The year was 2006 and Northern Illinois had a 7-5 record.  This was the first year that 7-5 teams would get in to bowl games instead of 6-6 teams from BCS conferences.  Whether this was a blessing or a curse for this NIU team is to be debated.  I personally did not feel like we deserved a bowl game that year the way that the team played throughout the course of the season.

Sure, we had RB Garrett Wolfe, but we weren't a complete team.  Sure we had a pretty decent passing offense, but that was because Garrett Wolfe always set up the pass by running the football and being a threat out there.  Our pass defense was also horrible that year, coming in to this game ranked in the 100s.

The MAC was in a definite down year and the only win we had over a team with a winning record was Central Michigan...the week after they had already clinched a berth in the MAC Championship.  By about halfway through the season teams like Western Michigan figured out our offense and managed to stop Garrett Wolfe.  We lost games we shouldn't have like against Toledo and looked really bad against Iowa.

TCU was phenominal that year.  The national media was just warming up to mid-major schools so they were just on the verge of being in the top-25 at the end of the season with a 10-2 record.  Their only losses were to the usual suspects BYU and Utah, who both ended up winning their respective bowl games that year.

The Horned Frogs had a top-10 scoring and rushing defense, so we knew were running right in to a buzz saw.  I'm sure the experience was fun and the extra practice helped out the younger guys a bit, but looking back I just wish we didn't have to face one of the best defenses I had ever seen.

The game is not a fond memory of mine, but here are the stats. If nothing they can be motivation for this year: 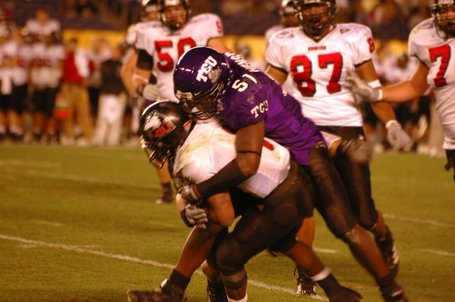 There's really no need to expand on the 37-7 loss  Any decent offense can be efficient if their defense shows up and played like they did on 12/19/06.

To this day I still think that the 2005 team that lost in the MAC Championship game was a better team than the 2006 team.  Except they never made it to a bowl game because of one single play.  This year's NIU team is more balanced than the 2006 Huskie team, but it would be a good matchup between the two.

I really shouldn't be complaining about going to a bowl game, but it sure was embarrassing watching them getting taken out and put to dry on national television to start the bowl season that year.  TCU's athletes were phenomenal then and are phenomenal now and this team is  underrated year in and year out.

Senior DE Larry English has some thoughts on the bad taste in the mouths of the NIU upperclassmen that 2006 left them:


Larry English talks about heading to a bowl game @ Yahoo! Video
Obviously the San Diego Poinsettia Bowl has come a long way since we played in it.  Two top BCS teams going at it when TCU takes on the Boise Broncos.  I see TCU winning their second P-Bowl, 21-18.