Bad bad bad showing at the Convo today.  The only good thing had the initials MD.  If we were to make a few more of our free throws (7 of 23) then I think we had a much better chance at winning this game.  Our FT % has to be one of the worst in the nation at this point.  CMU plays a down and dirty type of basketball and we got pushed around at our own place.  Patton apologized to the fans in the postgame interview.

What more can you say about our only offensive threat in this game in Mike Dinunno?  He scored 25 of our 45 points and he also led the team with 3 steals.  Jake Anderson had 1 point, as he was 1 of 7 from the charity stripe and 0 for 6 on FGs.  We need Jake to be the leading scorer he can be if we want to win more games.  PG Bryan Hall had a couple dishes, but continues to NEVER shoot the ball which puts a limited handicap on our offense.  Jeremy Landers had a couple nice steals and put some defensive pressure on the Chips, but could not hold on to the ball turning it over 4 times! 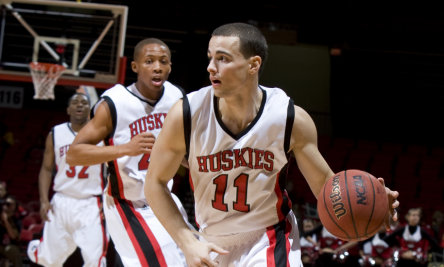 Najul Ervin only played 11 minutes and sat out the rest of the game with "dizziness".  We really missed his presence on defense for the majority of the minutes in this one.  Sean Smith played 37 minutes and only scored 4 points, while turning the ball over 3 times.  He led the team with 6 assists, but just wasn't getting any looks on O.  Lee Fisher played for only 7 minutes and Tyler Storm hit two garbage time 3-pointers (as usual).

Sean Kowal scored a measly 3 points while leading the team with 6 rebounds.  He had completely the opposite the game he had against Eastern Michigan as he should have had at least twice as many points and rebounds as he did today.  Ante Dzepina did what he needed to do in only 14 minutes, grabbing 4 boards and scoring 4.  If Kowal doesn't get tougher under the basket, I can see Ante taking more and more of his playing time.

It's only going to get tougher as we head in to the MAC East come Wednesday @ Buffalo, so this team needs to find some sort of consistency if we want to stay in the race for the MAC West.