Of Broncos and Huskies

Share All sharing options for: Of Broncos and Huskies

When you're covering Northern Illinois, it is always of utmost importance to check in with what is going on up in Kalamazoo, MI from time to time.  The Broncos are the closest MAC team to Northern (3.5 hrs away) and are serious competitors in the West every single year.

Western Michigan was projected to go the Independence Bowl before we took up that option at 6-6, providing the 5th MAC team to make a bowl game.  WMU had to settle for Houston to take on Rice in the Texas bowl instead.

Broncos beat writer Graham Couch talks about how teams with the most talent usually win in bowl games, which is not always the case in the regular season.  He states:

In the MAC's case thus far, only CMU and Northern Illinois, as it turned out, had comparable or better talent. Two days before WMU's loss to Rice, Tom Ricker, the father of Bronco assistant A.J. Ricker and a Houston native, told me he thought WMU might have trouble with the Owls. He'd seen both teams throughout the year.

Northern Illinois, with a decent quarterback and better kickoff return defense, would have beaten La. Tech.

But he then takes away any praise he has for NIU and talks up his own team who got blown out 38-14 against Rice:

Secondly, matchups are key to this, too. Had the MAC not tried to place 6-6 Northern Illinois in a bowl game -- it had no business in the postseason -- and had WMU taken the Independence Bowl matchup with Louisiana Tech, the MAC probably gets a win there, doesn't have an NIU loss and is 1-2 at this point.

With the MAC at 0-4 in bowl games this year, I don't think it is any specific team's fault.  I also don't understand if he's putting the blame on the conference or the bowl system all together.  Anyways, the MAC fell short of anybody's expectations this year and our only saving grace is Ball State against Tulsa in the GMAC bowl on Tues.

Other news and notes about the Broncos that you may find interesting:

He'll make at least $375,000 a year -- I'm guessing closer to $450,000 when all the incentives are in place. It's great money for the common man. It's great money for a coach. But, though WMU is trying its best -- and John Dunn and Kathy Beauregard deserve a ton of credit -- it's not ahead of the market. 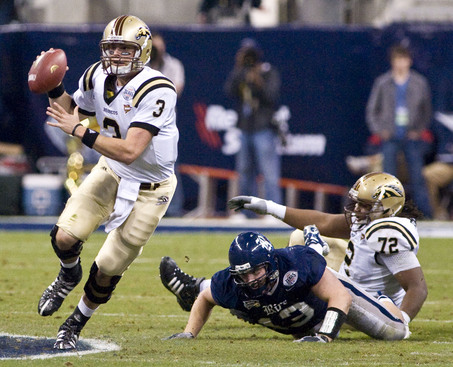 He'll miss spring practice, which he needs less than anyone (as Cubit pointed out), except to get used to throwing to Jordan White, Dervon Wallace and Seth Patterson, all of whom figure to factor into next year's playing group at receiver.

It'll mean valuable reps for Drew Burdi and Alex Carder, and maybe Robert Arnheim, if he moves back to quarterback.

Hiller wasn't near the quarterback against Toledo, Ball State and Rice that he was the rest of the season. Now we know why. That he didn't miss practice or games says a ton about his character -- but, as we all know, that's never been an issue with Hiller.

Now we can only hope that WMU doesn't take any recruits from us come signing day in a month to intensify the fledgling rivalry between the two MAC West forces.