That's not how you want to see your conference perform in post-season play.

Looking back, I think it's safe to say that more often than not, MAC teams were in over their heads in bowl games this year.

21-24 L.  Central Michigan didn't play like themselves when they were upset in their home territory by the well-coached Owls of Florida Atlantic.

10-17 L.  Northern Illinois barely got in at 6-6 and had to face a home crowd in Louisiana against the La Tech Bulldogs in the Indpendence Bowl.

14-38 L.  Western Michigan got manhandled by Rice on both sides of the ball which may or may not have anything to do with QB Hiller playing with an ACL injury these past couple games.

20-38 L.  Buffalo turned out to be the surprise MAC champions, but failed to step up against a stout UConn running game and defense.  I still don't get how the Bulls still manged to get blown out when the Huskies gave them the ball 5 times in the first half on the ground. 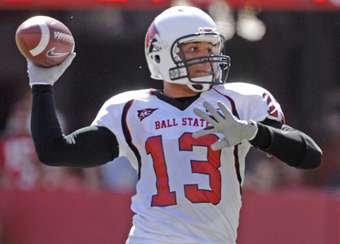 Can Nate Davis lead the Cardinals to victory tonight?  Will he go pro later this month?

?-? ?.  In a battle to bounce back from the MAC Championship game, the Ball State Cardinals have a chance to obtain more national respectability for themselves and the conference when they take on Tulsa tonight.  In what is supposed to be a shootout in the rain, it should be interesting to find out which one of these top-ranked offenses can come out on top.

Follow the action over at OverThePylon's Live Blog starting a little before the start of the GMAC Bowl.