Share All sharing options for: Because "I'm in Oxford at Miami University Trick" wasn't catchy enough

After some time to reflect, I thought I'd add some thoughts about this game that you wouldn't get right away from just glancing at the box score.

How conservative was this offense, really?

Let's breakdown every time we passed the ball:

The 20-2 Run to Pass ratio on 1st down wasn't exactly the right way to do things.  I know we're a run-first team, but it doesn't hurt to mix things up a little bit.  What I don't get is that in the 3rd quarter we passed twice on 1st down in the same drive and that 2nd attempt resulted in a turnover.

The running game was working.  You don't average 5.2 ypc and not have it being effective.  The gameplan was fine.

Here are the bigger reasons the drives stalled that you can blame:

Grady needs to work on getting the ball off faster, because he's not always going to have time to throw back there.  The problem is that we don't want him to become a run-first quarterback.  He'll get a lot of playing time and experience in these next three games hopefully.

The situation: Garrett Barnas runs the ball up to our own 46 yd line.  The offense comes out, looks confused and then DeMarcus Grady uses the final timeout of the half.  Only 29 seconds were left where we could have thrown some passes downfield and set up a field goal attempt.  Instead, Coach Kill wanted to take a knee in this situation.  This was a move not to win the game, but to NOT LOSE the game.  The fans were extremely upset at this point, but I can see where Kill was coming from with his inexperienced QB and the fear that Miami might take an interception back and kill Grady's confidence.

Were we ever really in danger of losing this game?

Yes, for 2 plays.  After Miami scored a TD to make it 16-20 Huskies, I was extremely nervous that the Redhawks were only within 4 pts of winning the game.  An onside recovered by us and a Chad Spann TD later, those fears were quenched.  The rest of the game, Northern Illinois was up by at least 7 points after the 17-0 flurry of a 1st quarter.

One thing you would only get from watching the game would be how undisciplined the defense played.  We pretty much sent the house at the QB, disregarding their non-existent running game.  Needless, I was disappointed by how the secondary looked all game. 348 yds given up through the air is not good any way you look at it.

You can partly blame this on personnel as David Bryant exited the game early at FS.  Both Garrett Barnas and Jody Van Laanen made appearances at the safety spots.

Both Chris Smith & Patrick George had pass interference penalties, but both drives ended up in blocked field goals anyways.  I guess sometimes it's worth it if you don't want to give up the big play.  Both CBs got beat a couple times and it looked like the mediocre Miami WRs were taking them to school

I'm not mad about these late hits, especially the Sobol one.  These guys were just trying to be aggressive and make plays.  It did get a little excessive with the sideline hits though.  I'd rather have an aggressive than a passive DB all day.  Marcus Lewis on offense even got caught trying to make a block below the waist a little after the play that netted a negative 15 yds.  I want this defense to B-E be aggressive, just do it with your head screwed on straight, please. 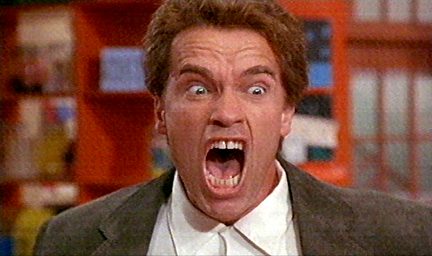 John Kimble...er Coach Kill wants to see you in his office