Miami OH +18.5 @ Northwestern.  Just look at the Wildcats two victories over FBS opponents.  They beat Eastern Michigan by only three points playing on their home turf.  And last week Purdue turns the ball over SIX times to NW and they only win by a scant 6 points.  Take the extra points on an improving Miami team. What I'm wagering: 3 healthy scoops of Zac Dysert

Bowling Green @ Kent State +1.5.  This minuscule line just wreaks of an upset for the home dog in the Golden Flashes.  BG can't stop making dumb mistakes and KSU looks serviceable enough just to eek by in this one and their pass efficiency defense is an underrated 3rd in the MAC.  Exit Giorgio Morgan and Eugene Jarvis and enter Spencer Keith & Jacquise Terry at QB & RB. What I'm wagering: One of my un-lacerated kidneys

Ohio @ Akron +3.5.  Yet another home dog that should be feared.  Akron is off of a bye week while the Bobcats travel to Akron on their 3rd straight road game.  The home team has won this matchup since 2005. What I'm wagering: A kangaroo with boxing gloves

Western Michigan +9 @ Toledo.  WMU is shocked and embarrassed from their defeat the week before against the mighty NIU Huskies.  Toledo's been looking the other way feasting on cupcakes such as Ball State, FIU & Colorado.  And they don't have much of a defense.  Looking for the Broncos to bounceback huge in this situation. What I'm wagering: A month supply of donuts to former Toledo HC Tom Amstutz 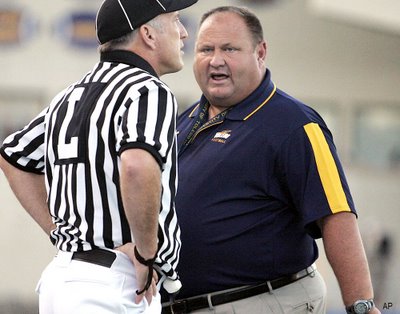 I'm holding you to that donut bet