So Central Michigan, you've wrapped up the MAC West title.  What's up next for you?

If CMU doesn't have a title to play for, they're simply not going to show up.  Look at what happened last year:

After Ball State ripped away all their hopes and dreams, the Chippewas laid down and let Eastern Michigan roll up on them.

So what DOES Central Michigan have to play for?  10 wins.  Undefeated in-conference.  Senior night/LeFevour stat-padding night.  Doesn't sound that exciting, because it isn't.  I honestly don't think that Butch Jones has the capability to get this team ready for Friday.  It's just natural instinct to play less hard now that they've already clinched.  Part of the players psyche.

Plus it's Thanksgiving weekend.  The players minds might be elsewhere.  The stadium will be nowhere near full capacity as most students will be home.

So what does NIU have to play for?

You can go on and on about stats and whatnot, but so far this season stats don't mean bull.  Statistically, we should have beaten both Toledo and Ohio, but we didn't.  So what do you turn to?  The psychological edge that Northern Illinois has over CMU.  We've both played the same terrible MAC teams and mediocre Big 10 teams, so there can't be a mountainous difference between the two squads.  It's whoever gets out there, puts effort into their playing and executes will win the game.

In order to counteract that notion however, CMU has been working on their 6th sense skills:

Whatever you do Huskies, just make sure you don't stare directly in to the eyes of Antonio Brown on Friday and you'll be fine... 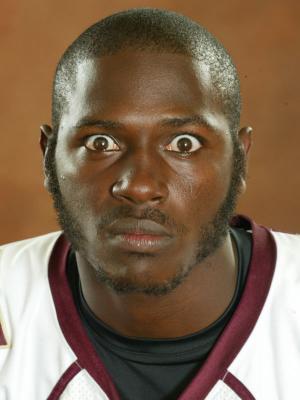