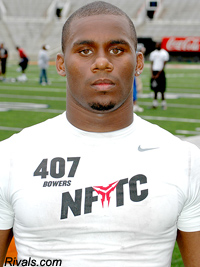 It's been a long time since we've heard even a spec of recruiting news since Bolingbrook LB Mike Hellams committed to the Huskies WAY back in June.  Since then, he'd been sidelined by a shoulder injury for most of the season and a DB from Indiana decided to change his commitment from the Huskies to...Ball State?
Anyways, Kill's been a combination of keeping things under wraps in terms of recruiting and he's been very careful who he gives a scholarship to.  This is because this upcoming 2010 class is going to be very small, due to the scant number of scholarship seniors that are graduating.  I'd say that we only have around 10-12 scholarships left to hand out in addition to these recent commits.
Watching film of Giorgio Bowers, I can see why Kill was the first to offer him and stuck with him until now.  He reminds me a LOT of Chad Spann not only his size (5'9" 200ish) with his leg strength and ability to break tackles.  His squat and bench numbers are ridiculous and he's just that 'I'm not running out of bounds' mentality.  The one thing that sets him apart is his agility.  He's got all the moves and quickness to be an every-down back, which is perfect for the spread offense that NIU likes to run.  He's definitely a playmaker and adds depth to the shallow group of proven playmaking running backs (Spann and...)

He doesn't quite have the breakaway speed judging from film and his 40 time.  Rivals lists 4.59 and Scout has 4.52, so we'll just say 4.55 range.  That's actually not a bad 40 time, considering his size and how often kids verbally make up more speedier times just to get more recruiters looking.  The only other flaw that I see is that now he's too much of a stand-up runner, but that can be corrected.  He'll likely redshirt his freshman year, so he can step on the field as soon as Spann graduates after the 2010 season.

His only other D-I offers were from Akron and Bowling Green.  Although he is a workout machine, I think a big reason he didn't get more offers is just because wasn't from a winning program and didn't play against top competition.  6A Olympia Fields was only 4-5 this year and only 2-7 in 2008.
Probably the biggest recognition he's gotten is that EdgyTim ranks him as a 3-star player on Rivals and the #27 player in Illinois.  Good job by PJ Fleck recruiting two top-30 players from Illinois to play for the Huskies so far this year.  The two we were focusing the most of our attention on early, we got.

Welcome to the Huskies Giorgio!