Share All sharing options for: More on the commitment of Prospect Quarterback Miles "Osei can you see" to NIU

DISREGARD ALL OF THIS 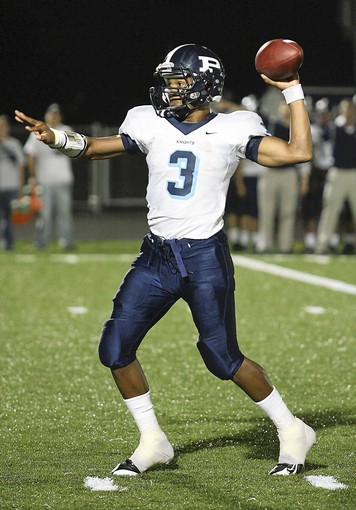 Miles Osei is a tremendous commitment to the Huskies.  He had a slew of offers, put up monster stats and led Prospect to a very successful season.  In terms of pure football players, he has to be one of the select few of the greatest in Illinois this past season.  Osei was one of the fast risers in the state, as EdgyTim had him as a 3-star prospect and ranked him as the #17 player in the state back in May.

The big question that always has surrounded Osei is the fact that he hasn't received offers from any BCS schools such as the Big 10.  Quarterback is probably the most sensitive position on college football to recruit.  Every QB wants to be the star and every coach wants to have depth at that position.  NIU and Coach Novak found this out the hard way throughout the 2007 season.
The state of Ilinois was loaded with quarterbacks this past season, but most of them were pro-style quarterbacks with good size who sat back in the pocket and slung the ball around.  Case in point Lake Forest's Tommy Rees (Notre Dame commit, still), DGS's Chandler Whitmer (Illinois commit, still again) and Wheaton North's Taylor Graham (Ohio State commit).  The only spread guy was the downstate monster from Rochester in 6'5" 205 lb Sean Robinson who committed to Purdue.
He's not a "workout superstar", as it's not apparent that he made the rounds at combines and college camps.  Big schools are all about numbers like 40 times.  Those type of schools need commitments early and Osei was somewhat of an unknown commodity.  He just took the field and won games, rather than focus on himself.
Scholarship spots are limited.  Osei is around 6'1"-6'2" and runs a 5-wide set spread offense at Prospect.  If you're from a big school, it's hard to take a chance on the kid because you might not be sure if it's just the system, or if this lefty athletic spread QB on the shorter side is going to be able to see the field. B10 schools will look at you and try to move you to WR or defense.
A QB has to find the right system to transition his skills from the high school level.
The Huskies have that system.
But that's just one end of the spectrum.  Prospect's coach talks him up as one of the most hard-working individuals that he's ever coached:

If you want to know who Osei's biggest cheerleader is, look no further than long-time recruiting guru Tom Lemming, who you might have caught in the movie "The Blind Side":

"This is the year of the quarterback in the Chicago area and Osei and Rees are the two best," Lemming said. "If the Big 10 doesn't take Osei, they are making a mistake. He is another (former West Virginia star) Pat White. If you are looking for a quarterback to run the spread, there is no one better than Osei. If you are looking for a dropback passer, Rees is the choice."

But I've seen Osei in action and I think he has an edge at the moment. The 6-2, 194-pounder is more effective and more productive than any other others. He is a high school version of Michigan freshman sensation Tate Forcier.

Osei can run and throw. He is a one-man show. He makes all the right moves. He has been offered by Northern Illinois, Southern Illinois, Illinois State, Tulane and Ball State. But I believe he is being overlooked by big-time programs. He is, in my view, Big 10 material. He is one of the top 100 players in the nation.

Remember, North Chicago's Michael Turner had no big-time offers before landing at NIU.

I didn't even know Tom Lemming was on twitter, but he said this quote on there, which is my favorite:

Here's his entire profile on Osei:

•••• Miles Osei 6-0, 190, 4.5 Mount Prospect
Here is another ball player who certainly deserves his four stars.
On Film–He is one of the more exciting offensive players in the Midwest. He is a joy to watch with the ball in his hands whether he is throwing it or running with it. He has always gotten great production and all he does is win. He is tough as nails, does a good job of locating open receivers, and delivers a nice catchable ball. He reads defenses well and can make big plays with his feet. A dynamic signal caller who will, believe me, become a dynamic signal caller at the college level.
Stats–He threw for 2,238 yds and 22 TDs and was picked off just twice completing 145 of 225 passes. He also ran for 1,237 yds and 18 TDs averaging 7.2 yds per carry. He is a high school version of Pat White.
Other Sports–He batted .389 as an outfielder in baseball.
Grades–His GPA is over 3.0 and he scored a 24 on the ACT.
Favorite Schools–NORTHERN IL, FL, PURDUE, IN, IL, NORTHWESTERN, AIR FORCE, NAVY, and COLUMBIA.

So why did Osei pick NIU?  It just felt right:

"I liked the fact it was close to home so my parents and family members could go to games," Osei said. "They've been recruiting me the whole year and they've been loyal, trustworthy, honest and upfront about everything they've said.

"There were nothing but positives and it's a program on the rise. It all definitely factored into it."

"They're honest and down to earth people," Osei said. "They're what you're looking for - the average person."

"Other coaches and other schools wanted me to play other positions," Osei said. "(NIU) said they wanted me strictly at quarterback and to be the quarterback."

We were his offer way back in March, but it was worth it sticking on him until the end:

"My family and my coaches definitely helped me through the whole process," he said. "I wanted to be patient, see who comes and who stays with me."

What's next for the super-athletic QB?

Osei will graduate in June and report to Northern Illinois in DeKalb by the middle of the month.

"I'm just going to go in there and learn as quickly as I can," Osei said.

And those who know him best believe it won't take long for Osei to make an impact for the Huskies.

"His best football is probably ahead of him and that's a big statement considering what he did in high school," Pearlman said.

And looking WAY to the future?  When Harnish graduates, RS Sophomore Miles Osei will be fighting it out with Juniors AJ Hill & Jordan Lynch for the starting spot in 2012.  Interesting to note that both AJ Hill and Osei are both left-handed.

DeMarcus Grady will be a good mentor to Osei as they both have a similar style.  The big difference between the 2 QB is that Grady barely threw the ball in his offense in high school.  Miles might be able to teach the other #3 a lesson or two in the spread offense himself!

Maybe we'll get a sneak peak of what Britt Davis could have been if he never switched to WR and a was in a system that matched his strong suits like Kill's does.