Huskie of the Decade: P.J. Fleck

Share All sharing options for: Huskie of the Decade: P.J. Fleck

Huskie Wire is taking nomination for the best of the decade.  MVP, Best Football Player, Best Coach.  To me, there's one Huskie that cannot be put into a category.  That person is current Wide Receivers Coach and Recruiting Coordinator P.J. Fleck.

No other sport than I can think of has more turnover than college football.  Players graduate and new players are recruited and become freshman every single year.  Coaching changes happen often and philosophies change.  In this day and age, so much money is invested in college athletics that the game is becoming more business-like every year.  Just look at the recent Urban Meyer news, coaching is a stressful profession!

The rarity is the people that stay.  It's always the better story when a player returns to his Alma Mater to give back even more.

P.J. Fleck was part of the 1999 recruiting class along with RB Thomas Hammock.  He started returning punts his freshman year and eventually he ranked first in number of punt returns with 87 and second in punt return yds with 716.  At WR, Fleck spent time behind Justin McCareins until he finally broke out in 2001 with 59 catches for 732 yds and 5 TDs. 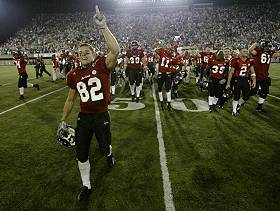 After a painful hamstring injury that sidelined him for the 2002, he returned for his 5th year in 2003 to have his greatest season ever as a Huskie.  He caught 77 passes for 1,028 yds and 6 TDs that year.  The epitome of hard-work payed off as the senior captain was able to lead the Huskies to a 10-2 season, including wins over ranked Maryland and Alabama teams.

Fleck was a player that truly had been through it all.  The more effect he had on the team, the more the Huskies started to win more and more games.  He's been through the worst and he's seen the top of the mountain.  College co-eds wanted him and everybody else wanted to be  him.

After signing on as a free agent with the San Fransisco 49ers from 2004-05, Fleck decided to learn from the best signing on as a GA on a top-ranked Ohio State squad in 2006, ironically the season opening opponent for the Huskies that year.  Joe Novak hired him on to the 2007 staff as WRs coach, where he's spent his time since.

Fans started to get a bit nervous when Coach Kill took the reigns in 2008, afraid that Fleck might leave the program.  Not only did Kill keep P.J. on his staff, he also had enough faith in him to make him recruiting coordinator after Mike Sabock was let go.  Such a bold move is starting to bear fruits, as both Fleck and Kill are making serious waves in the recruiting department unseen by previous regimes.

P.J. Fleck has seen it all.  He's the bridge that holds the entire modern history of Northern Illinois Football together.  His wealth of experience gives him that foresight to see what can go right and what can go wrong for a team as it progresses season-in and season-out.

The man was the ultimate team player and a high character person both on and off the field.  Nobody can match his fire and dedication.  You can ask any Huskie fan which one player defines Northern Illinois Football as a whole and they will tell you: PJ FLECK.

He's only 28 and has a bright future ahead of him.  Some fans even like him as the next Huskie head man years and years down the road.

Thanks P.J. for your service and your dedication this decade.  We all appreciate it.