Does anybody have a compass they could let a USF fan borrow?  Or even that spiffy compass iPhone app? 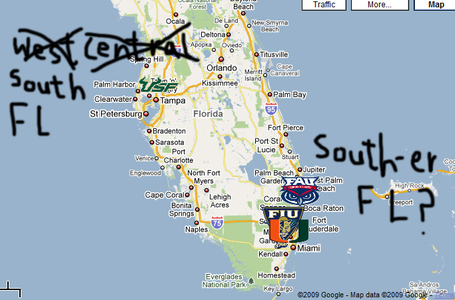 USF was founded in 1956. However, the university was not officially named until the following year, and courses did not start until 1960. Some of the original proposed names included "Citrus State University", "Sunshine State University," "The University of the Western Hemisphere," and "The University of Florida at Temple Terrace."[9] Former US Representative Sam Gibbons was instrumental in the school's creation when he was a state representative and is considered by many to essentially be the school's founder. It was built on the site of Henderson Air Field, a World War II airstrip. Although located in west-central Florida, at the time of establishment USF was the southernmost public university in the State of Florida, a geographic situation that lent USF its sometimes confusing name.

What's the motto of USF?  "Forward Thinkers"?  I would have went with "The University of the Western Hemisphere".  Since, you know, half of the entire globe would have then flocked to your school.