The results are in and they aren't remarkable, but will they hinder #51's position in this upcoming draft? 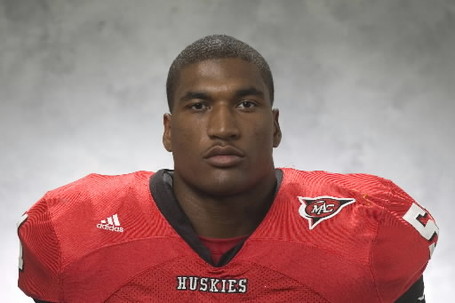 What player is really going to make a broad jump during an NFL game?  English did only bench press 225 lbs 24 times, but that is good for somebody who has long arms and an extremely long reach.  That usually hinders some offensive and defensive linemen from putting up out-of-this-world numbers.  I'd like to see his max bench though.

Is English ever really going to run 40 yards at one time in a game?  Perhaps if he is going to make the transition to OLB in the next level.

Here is what other people are saying about his performance:

One of SI's Sliders

Larry English/DE-OLB/Northern Illinois: English could not capitalize on a solid Senior Bowl week. He was effective in during the practice session at both defensive line and linebacker. The issue is his forty time as English could not get under 4.8 seconds on either attempt. Scouts may now think twice about using English at linebacker in the NFL. It wasn't a terrible workout for English but it likely dismissed any chance of the Northern Illinois star ending up in the draft's initial twenty selections.

Northern Illinois standout Larry English posted a disappointing 40-time which was as high as the 4.9 range in some draft circles. He did post some of the best numbers in the 3-cone and 20-yard shuttle however; his straight-line speed may be a concern for teams looking at him as a pure 3-4-rush linebacker.

Larry English (6-2, 257), Northern Illinois - English was a sack machine in college. He recorded 31.5 quarterback takedowns and eight forced fumbles at Northern Illinois. While he bench pressed 225 pounds 24 times, English did not help his draft stock when he ran below a 4.87 time in the 40-yard dash. Scouts were expecting the undersized English to run much faster than that. English did put his athleticism on display by posting a 36-inch vertical, which was the sixth best of the defensive linemen. The good news is English, who could play on the line in a 4-3 or linebacker in a 3-4, plays much faster on film, and his disappointing 40-yard dash time could actually make him available to the Bucs at 19 in the first round.

3. Larry English, Northern Illinois (DE)  6-2, 255
Pre-Combine Position Rank: 3
Post-Combine Skinny: While many might focus on his slow 40 time for an outside linebacker, running a stunningly bad 4.85, his movement in the short drills showed exactly what everyone knows; he's going to be a strong situational pass rusher. The 24 reps in the weight room all but confirmed that he can't be an every down end.
Positives: Superior pass rushing ability … A blur out of the block. Can’t be hit by bigger tackles … Was great against everyone, not just against MAC teams.
Negatives: What’s his position? Too small to play defensive end and didn’t play linebacker in college … He’ll have to learn how to play against the pass.

He has a chance to improve his 40 time at the pro day @ NIU to improve his draft stock to a sure 1st rounder.  After running such a slow 40 time, English almost has certainly fell to the early 2nd round.  But hey, I'm no NFL scout so what do I know.