Highly touted K'allanta Miller got his Central Michigan thug on before he even enrolled as a freshman:

Seventeen-year-old Eric Wooten of Detroit and 18-year-old Kallanta Miller of Oak Park are accused in the robbery of three classmates of less than $100 while they shot dice.Police said Wooten walked into the bathroom and robbed his classmates at gunpoint.Wooten is jailed in Detroit on a $50,000 bond and Miller is jailed on a $250,000 bond. 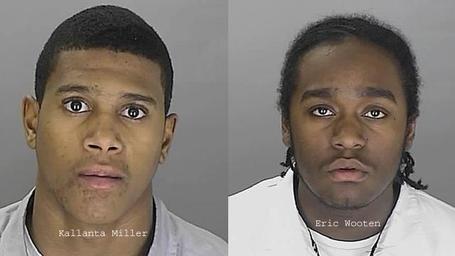 Drew Ellis of the Sun Sports Blog adds that CMU's coach Ernie Zeigler may have to go the JUCO route just to get some bodies, as CMU was really banking on K'allanta Miller making an impact next year.

Kyle Warber of Fire Up Chips! provides a much needed anecdote of what might have gone that day:

Midway through your Spanish verbs you find yourself bored and uninspired. Your mind starts to wander-- you need a break.

You need something to occupy your mind.

If only there was someway...somewhere...somehow... you could commit felonious armed robbery...

"Dice games get robbed.  It happens all the time."  Good job Chips in continuing to recruit excellent character guys!