MAC Tourney: Huskies gone in a Flash losing to Kent State in the 1st round

Share All sharing options for: MAC Tourney: Huskies gone in a Flash losing to Kent State in the 1st round

The same thing happens to me every time that Northern Illinois gets to post-season play:  My computer goes haywire and I struggle to find a decent internet connection to get my blogging up to snuff.  Add that to the millions of articles out there that make my head asplode and you've got yourself a stagnant blog on one of the biggest days of the year in Huskie Athletics.

Boy, that didn't last long.  Weren't we supposed to be gaining momentum winning 4 out of 5 games going in to our last two road games against the worst team in the MAC?  That didn't end well as we both lost to Eastern Michigan and Toledo.

An interesting stat is that Toledo has won their last 13 straight senior days.  No big man was effective (except Fakuade?) against Toledo and MAC All-Freshman team member Mike Dinunno put up a big fat zero on the board.  We couldn't stop Toledo on offense and turned the ball over 17 times, not to mention Anderson only put 13 on the board.  Oh, how the road hates us as we failed to win a single MAC game away from Dekalb.

I know that Huskie fans thought OK, Kent State, we managed to almost beat them in overtime on our home court.  Especially when their best player in Chris Singletary was suspended one game for punching Akron's Nate Linhart in the game before.  There's even a video of the incident on youtube:

This isn't the first time Chris Singletary had done such a thing:

Truth is, Singletary's been a consistent headache going on three years now. There's more than one story out there about his penchant to allegedly lash out physically when he gets upset, no matter who it involves. The guy's been given chance after chance, yet continues to make stupid decisions. It makes you wonder if having him on the team is worth all the problems?

Ray Mernagh of MRO goes on to explain that maybe Singletary shouldn't even be allowed to play basketball anymore, at least not for Kent State.

Bill Livingston of the Plain Dealer supports that claim and the suspension of Singletary:

Bad blood already existed between Singletary and Linhart, a gangly player with sharp elbows and a reckless disposition. It goes back to when Linhart knocked Singletary to the floor after a free throw in a rout by KSU in the 2008 league tournament final. A foul should have been called then, but was not.

Singletary did not retaliate in the first meeting between the teams this season at Akron. He waited until he was at home, with a supportive crowd. That made the cheap shot seem premeditated.

Not everybody is in the same boat as Singletary.  The squad over there in Kent, OH gave a lot of props to NIU before the game even started:

They're deep, they're athletic and they have excellent guard play.''

"I think it’s going to take a greater effort to play longer," Anderson said. "At times we show greatness but in the spur of the moment we’re dead."

Then came the actual game.

Pretty much the same old story.  Second Team All-MAC selection Jake Anderson had 19 and Mike Dinunno came alive again scoring 13.  Michael Fakuade pulled down 11 rebounds and scored 8 in only 21 mins played.  Everybody else was very quiet...possibly hunting for wabbits. 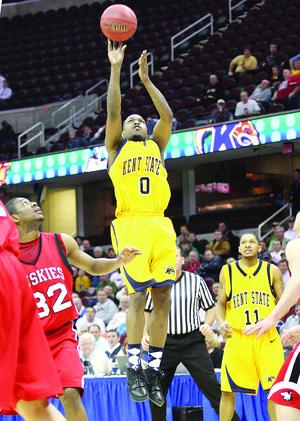 Kent State hit the shots during the stretch that mattered including McKee hitting 2 three-pointers down the stretch that really hurt the Huskies.  Al Fisher scored 25 in the game including 2 of the last field goals that Kent put in.  The Flashes were stagnant on defense, just allowing one basket by the NIU in just over a minute of play left in the game.  At the end, Jake Anderson had a chance to tie the game with a 3, but missed the last second contested shot he received from Dinunno.

Sure we could have gotten to the line a little bit more or made a couple more free throws, but mostly the stats for this game were even between both teams.

Shooting percentage was around 40% for each team, but both offenses were extremely effective.  The problem was that we turned the ball over 17 times which is way too much.  No having a bigger red bar in that area is not good.  We stayed in the game the whole way, but just lacked the experience or a play or two to go on to the second round.

The post-game piece by John Sahly of the Daily Chronicle was all about how this first round loss will only help the Huskies in the future:

"There’s no substitute for experience, really in almost anything you do," Huskies coach Ricardo Patton said. "The guy with the most experience is usually going to prevail."

One can only hope that the influx of talent by Xavier Silas and Tony Nixon plus an extra year of experience will make this team a force to be reckoned with in the MAC.