MAC Championship: Akron vs Buffalo for the Dance Ticket

Share All sharing options for: MAC Championship: Akron vs Buffalo for the Dance Ticket

Buffalo 63 @ Akron 61 - In the first meeting of the year, Buffalo only shot 36.7% from the floor, but dominated the boards 32-23 including grabbing 16 on the offensive side to win this game.

Akron 62 @ Buffalo 57 - Akron shot lights out at 52.3% in this late February game on the road.  Buffalo was less efficient on the offensive end and couldn't grab enough boards to win this game.

Funny how the lower seeds in this tourney are favored by the point spread AND winning games.

Akron has a small edge on offense and boasts the best defense in the entire MAC.

Here are some key Akron defensive stats that are above and beyond what the Buffalo Bulls have to offer:

If the Bulls have one advantage in this game, it's dominating the offensive and defensive boards, ranking 25th in the nation in each category.  If Buffalo can follow their shots and grab enough offensive boards then they have a very strong chance at winning this game.

Buffalo's Greg Gamble is a 6'4 G/F hybrid that leads the team in assists dishing almost 4 times a game while also placing second on the team with 5.1 rebounds pg. 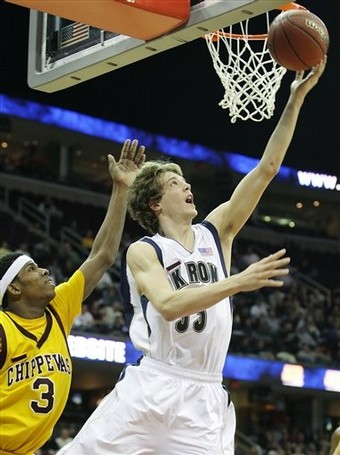