Share All sharing options for: Pitcher Andy Deain likely done for the year

The pitcher that established himself early as a potential ace for the Huskies will have to spend the rest of the season in the dugout, barring a miracle comeback. 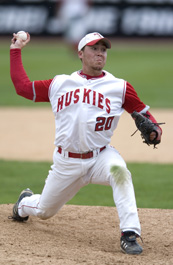 Deain was struck in the hand by a comebacker in Friday's game at Southeast Missouri. He left the outing after allowing six runs and 10 hits in four innings. Deain had a 2-0 record with four starts this season.

Deain was dominant last year coming out of the bullpen and made the switch to starting pitcher just this year.  It's a shame that somebody with as much talent to go down so early in the season.  It's one of those freak injuries that you just can't prevent.

The pitching rotation was already razor-thin and this will put the rest of the staff on very thin ice.

LHP Brandon Copp (0-2, 17.05) already has disappeared this season after getting shellacked in his start against Arizona State giving up 9 runs.

In the back end of the rotation, I'm sure we'll see more of RHP Nick Badgley (1-1, 4.86) who has been replacing Copp in his starts.  Freshman RHP Chris Wakefield (0-3, 9.64) will have to take even more of a bigger role.  We may have to reach in to the bullpen to pull another guy to start for us if we're shorthanded.