The attrition since Patton took the reigns of this Northern Illinois Huskie squad has brutal up until this year, where only Sean Smith will depart as the only senior on the team.  Last year we lost 5 seniors, 3 players transferred and 2 players were kicked off the team.  The continuity is much greater for this young team going into next season.

There is a bit of a debate on how many scholarships we really have to give out to any inquiring high school players for these upcoming seasons.  D-I basketball teams have a total of 13 schollies to hand out at any given time.  Let's start it off with a listing of who we have on the team for the 09-10 season: 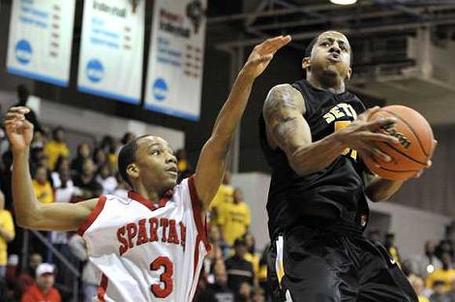 The two new additions are F Xavier Silas who is a transfer from Colorado who sat out this past season and incoming freshman G Tony Nixon out of Seton HS, who won state in the 2A division in IL.  Not to mention PG Keith Smith will be coming back from a season-ending injury at the beginning of the season.  He might have taken a medical redshirt, which would make him a redshirt freshman next year.

According to the above roster, we have two scholarships available to give this year to a player to accompany Tony Nixon.  Then next season, we will have 2 scholarships to give out (or 4 if we fail to sign anybody else this year).  This all works out only if Fakuade, Fisher & Peaster continue their walk-on status.

We already were able to beat Akron who turned out to be the eventual MAC Champions this year on our own court.  They will be looking for a return visit to the dance after only losing Nate Linhart to graduation.  Both the Zips and the Buffalo Bulls will be huge contenders in the MAC East.

In the MAC West, we must watch out for Eastern Michigan who returns a lot of talent just like us and made a huge surge towards the end of last season.  Central Michigan could also be a possible force if they can find a way to quickly cope with losing big man Marcus Van to graduation.

Of course none of this is factoring in the stellar freshmen classes that MAC teams may bring in pretty soon.