GARRETT BARNAS TO WALK-ON AT NIU

Share All sharing options for: GARRETT BARNAS TO WALK-ON AT NIU

The LaSalle News Tribune reports that highly-touted Harper QB Garrett Barnas is headed to Northern Illinois to continue his career as a defensive back for the Huskies, per his former HS football coach Dave Moore.

"I think it’s good for him," Moore said Monday. "I think he was just tired of the whole mess. He just wants to go play football somewhere. … He met the coaches up there when he went up there and walked around with them and talked to them. He liked the head coach Jerry Kill and the rest of the coaches. They’re a good group of guys."

Moore said Barnas will start as a walk-on at NIU.
"He’s going to have to walk-on for the first part and then they pretty much promised him a scholarship," Moore said.

I've heard rave reviews about our coaches here at Northern Illinois.  Recruits always seem to like them and are one of the most important aspects of our recruiting cycle.  Barnas had to go somewhere after Syracuse dumped him and NIU provided him an obvious local choice to play for.

Just as I had predicted, Northern Illinois was looking at this kid, but not at the QB position.  His former teammate from Harper, DE Kyle Jenkins is already enrolled here and playing spring ball.

The 3-star recruit per Rivals will provide immediate depth to our defensive backfield in case either of our safeties go down or if they need a breather.  He would fit in nice as a nickelback when we need more DBs out on the field.  Our secondary is young and Barnas has the athletic ability to get on the field right away.

Mike Gibson of Temple Football Forever REALLY wanted this kid at quarterback for the Owls.  Gibson provides great details about the saga that "Superman" Barnas went through this past recruiting season. 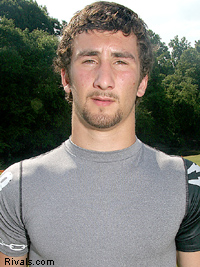 Here's his highlight video as a refresher:

That's one late signee down.  NIU's next target?  Minnesota WR Fritz Rock according to Huskie Wire.  The big-time WR had his Minnesota scholarship pulled, however still retains offers from Cincinnati, Indiana and Washington State.  (Rivals Profile / Scout Profile).  Rumor is that he has had some academic issues, but he might be able to sign on to the Huskies eventually.

In other recruiting news, OG Charvo Lampton, a player that Rivals.com reported as to have signed to the Huskies never actually signed on to the Huskies per John Sahly's Huskie Wire.