It's April and two things are for certain: Taxes and John Sahly braving the cold Dekalb weather to cover Spring Football.  Seriously John, mad props for making myself and every other Huskie fans happy because of the consistent reporting this Spring.

The Tuesday practice report on Huskie Wire is short, but sweet.  Sahly points out a familiar trend throughout the practices so far:

These practices are starting to take on a familiar theme. The offense dominates early and the defense dominates late. Neither side has much consistency but both have made highlight-reel plays at some point.

It seems pretty even on both sides of the ball.  I don't like how the offense isn't the side dominating late.  What's going to happen to them late in games?  Can the defense be the strength of this team again?  Sure, there are a bunch of offensive skill guys to report this summer, but who knows how much of an impact they are going to make.  Sahly also caught up with one of my favorite players CB Patrick George after practice:

14. Bill Cubit, Western Michigan. The no-nonsense Cubit is an underrated strategist and recruiting dynamo who is ready for the next challenge.

16. Butch Jones, Central Michigan. One of the top young minds in the sport has helped make CMU the premier MAC program.

19. Frank Solich, Ohio. He has taken all of that knowledge gleaned at Nebraska and enjoyed a solid run in Athens, Ohio.

23. J.D. Brookhart, Akron. He has built an all-star staff that could put the Zips over the top in the MAC.

25. Turner Gill, Buffalo. If he keeps the Bulls near the top of the MAC, Gill will skyrocket to a "Big Six" job.

35. Al Golden, Temple. He has breathed life into a moribund program. If he delivers a bowl, Golden will be gold – and gone.

39. Doug Martin, Kent State. He has come close to getting this program over the hump.

47. Ron English*, Eastern Michigan. He waited patiently for this job? If he wins, English will be hailed as a genius.

48. Mike Haywood*, Miami University. He almost got the Houston job. Now, Haywood gets to show his stuff at a school where you can win.

49. Tim Beckman*, Toledo. Beckman, who was hired off the Oklahoma State staff, knows the potential of this program.

These rankings are just OK.  What I don't like is Solich and Brookhart as high as they are on the list.  Both play in the MAC LEast, Brookhart is on the hotseat and hasn't had a winning record since 2005.  Solich has been less than average since his hiring in '05.  Turner Gill should be ahead of both of them, because he turned a program going nowhere into a MAC Champion just this past year.  Because of the high turnover in the MAC, Coach Kill is already in the top tier of coaches in the conference.

The team will compete in the eight-nation, four-continent International Federation of American Football Junior World Championship in Canton, Ohio, from June 27 to July 5. Teams from Canada, France, Germany, Japan, Mexico, New Zealand and Sweden will participate. 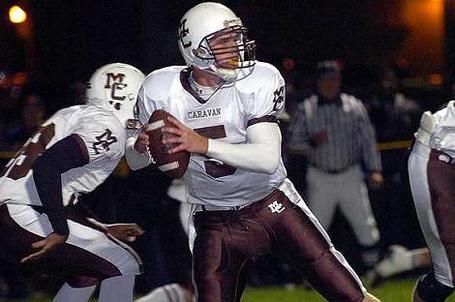 Lynch played QB in high school, but if you check the roster, he will be playing at the Safety position for this series of games.  I guess this confirms the position that Jerry Kill wants him to play once he arrives for NIU practice this summer.  He is the only Illinois player on the team and Lynch's Mt. Carmel Coach Frank Lenti will be an assistant for Team USA.

"One of the biggest things I want to do is help my family and help my mom with what she needs," English said of collecting his first paycheck or signing bonus. "There is some relief not having to worry about money, but I have to focus on what’s important, and right now that’s football."

So, where exactly is English heading?

It's inconclusive, but we do know that English will be at Fatty's Pub & Grille Saturday afternoon to sign autographs from 3-4 PM for the HASF fundraiser.