The answers are candid and very well thought out.  You may be surprised by some of the responses.  I had the privilege of being a cog in making this interview happen.  Here's the intro to the interview and I posted some of the questions and answers after the jump that you may find interesting: 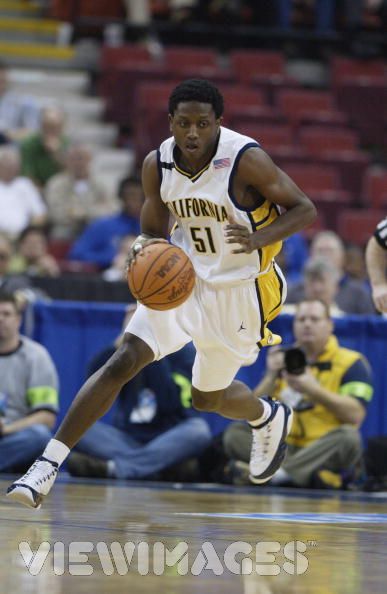 When I was at Cal, basketball was king.  It was the middle of the Holmoe era and at that time, Ben Braun was flirting often with the NCAA Tournament.  Cal also won the NIT Tournament!  And one of the key players during this stretch was Dennis "The Sheriff" Gates.  He was one of the smartest players on the court and people always spoke of how it was likely that he'd become a coach someday.  And lo, he did!  He currently coaches for Northern Illinois University, but did coach at Cal for a time.  Here is some more biographical information from his official Cal bio:

During his tenure as a player, Cal compiled an 83-46 record, winning 20 games in a season three times. In 2002, the Bears reached the semifinals of the Pac-10 Tournament and the second round of the NCAA Tournament. In addition, Gates was named to the all-tournament team at the Golden Bear Classic in '01-02 after hitting a three-pointer in the closing seconds to beat Penn State, 76-73, in the championship game.

Since graduating from Cal in 2002, Gates spent one year on staff with the NBA's Los Angeles Clippers and at Marquette University and Florida State. He served as an intern assistant coach under Alvin Gentry and Dennis Johnson with the Clippers in 2002-03, then was a graduate assistant on Tom Crean's staff at Marquette in '03-04, helping the Golden Eagles to the quarterfinals of the NIT, and a GA under Leonard Hamilton at Florida State during the '04-05 season.

A native of Chicago, Gates was a two-time first-team Pac-10 All-Academic choice and the 2002 Cal recipient of the Pac-10 Medal. He received Cal's Most Inspirational Player Award in 2001, the Pete Newell Award as the team's best defensive player in 2002 and was twice named the Bears' Outstanding Student-Athlete (1999, 2001).

Gates earned his bachelor's degree in sociology in just three years and competed as a master's candidate in education during his senior campaign. He recently completed his Master of Science degree in adult education & human resource development from Florida State University.

From the Northern Illinois Athletic site:

Associate Head Coach Dennis Gates, a four-year letterwinner for at California, enters his second season with head coach Ricardo Patton and the Huskies. Patton promoted Gates to associate head coach in March of 2008.

Gates came to DeKalb after spending the seasons as an assistant coach for his alma mater. Gates brings postseason experience both as a player and coach to the Huskies. As a coach, Gates helped lead the Bears to a record of 20-11 and a berth in the NCAA Tournament in 2005-06. As a three-year captain, Gates played a key role in the Bears' run to the 1999 National Invitational Tournament title, and he helped Cal earn bids to the NCAA Tournament in 2001 and 2002.

"Dennis is a young man that played at Cal, and graduated in three years," NIU head men's basketball coach Ricardo Patton said. "He is a guy that plugs us into Chicago right away and is well-respected among his peers across the country, but particularly in the state of Illinois."

Dennis Gates was kind enough to answer some questions for us and for that we are eternally grateful.  Thank you, Dennis Gates!  And Go Bears!

As a young person who loved basketball and loved competing, I was always intrigued with the coaching side of the game.  Whether it was the X's and O's, individual improvement, part method teaching and/or film analysis.  I never looked
at myself as just a basketball player, I looked at myself as a player with coaching ability and once my four year college career was over I quickly became that coach with playing ability. 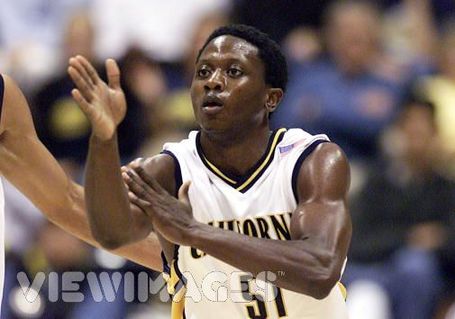 The Sheriff lays down the law.  -  Image via cache.gettyimages.com

6.  Who was responsible for nicknaming you "The Sheriff"?

MY AAU coach Larry Butler from the Illinois Warriors was responsible for the nickname.  It was given to me due to my ability to impact a basketball game defensively.  Throughout my AAU career (7th Grade-12th), we won all but 5 games out of about 500.  At the same time, it was my teammates both high school and AAU that used it the most.  Just in case you were wondering who my AAU teammates were I will give you a list of names and college attended. Quentin Richardson (DePaul), Cordell Henry (Marquette), Tavares Hardy (Northwestern), Rod Thompson (Iowa), Travis Wilson (Arizona), Brian Wardle (Marquette), Dorian Williams (St. Mary's), Sean Lampley (Cal), Bobby Simmons (DePaul), Corey Harris (Ball State), Corey Maggette (Duke), Jerrance Howard (Illinois) and Darius Miles (NBA).

10.  What interested you in joining Northern Illinois as a coach? 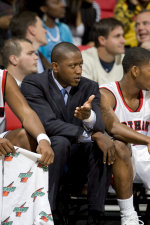 Dennis Gates on the NIU bench.  -  Image via grfx.cstv.com

The one thing that interest me in joining NIU and Head Coach Ricardo Patton was my further development as a college basketball coach.  Initially, I was given the opportunity to take on lead assistant coaching duties.  After my first year, I was then promoted to Associate Head Coach.  As Associate Head Coach, I carry day-to-day, and more specifically, in-game head coaching duties, decisions and responsibilities.

11.  Where do you see yourself in the next 2-3 years?  What are your immediate and long-term goals?

My long term goal is to win a National Championship as a Head Coach.  In the coaching profession, you never know when you will get the opportunity to be the CEO of an Institution's basketball program.  However, I want to continue to learn from the best, apply the things that I have been taught and continue to grow, just in case my phone does ring.  My immediate goal is to become the best assistant coach in the country.  In the next 2-3 years I see myself on the sidelines of the National Championship game as an assistant coach.

12.  What is the focus of this off-season and how will you continue to develop the talent and potential of this young NIU squad?

I feel that I have helped assembled one of the most talented young teams in the Mid American Conference.  The focus of this off-season is to improve individual skill sets, team & individual defense, team & individual assist-to-turnover ratios, free throw shooting and individual strength. Granted, some areas will develop as freshmen & sophomores become upperclassmen, I feel that if we continue to identify talented, tough-minded, resilient and self-motivated kids the program will soar to new heights.

The California Golden Blogs would again like to thank Dennis Gates for taking time out of his busy schedule to answer these questions.  Go Bears!

Wait, did I read the second from last answer correctly?  Let's read that again:

In the next 2-3 years I see myself on the sidelines of the National Championship game as an assistant coach.

I guess that we have a lot to look forward to in the next couple years!!!

Great job by TwistNHook from CGB on the questions.  The last couple questions were actually originated by yours truly and turned out to have great responses by Coach Gates.