First of all, I apologize for slacking slightly with NFL Draft/Spring Game coverage.  I've been really sick lately and guess what?  I'm graduating from NIU in less than 2 weeks.  Anyways, let's get down to business:

Other than Jets signee Britt Davis, here are the other Huskie pro prospects, according to Huskie Wire:

WR Matt Simon has a tryout with the New Orleans Saints

"I'm excited about it," Simon said. "Like I said from the beginning, I was just looking for an opportunity and I'm going to treat it the same way as if I got drafted. I'm going to go in and run with it."

Simon battled a foot injury for much of his senior season at NIU, but still finished second on the team in receptions with 24 catches for 377 yards. He did have a six-catch, 131-yard performance against Central Michigan. Simon ran a 4.48 40-yard dash at NIU's pro day.

Here's my favorite Matt Simon highlight that I actually experienced in person:

He'll never have to deal with this weather inside of a dome stadium: 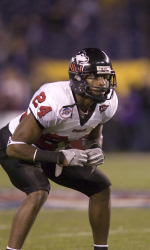 Pruitt was a spot starter that played both CB and Safety in his career as a Huskie.  Detroit Lions?  Hey why not, they need a lot of help.  He's got great size standing at 6'1".

Good luck to every departing player in the tryouts by their respective NFL Teams!