Spring Practice is over and it's time for all of the NIU coaches to focus more on a very important factor: Recruiting.  I'm no expert about recruiting.  I don't know if it's a "dead time" or if coaches are limited in coming in contact with recruits.  I do know that they're reviewing film as we speak and handing out a select few offers.  Here's one guy that we just offered that I'm especially excited about.  That's him in the dark jersey returning an interception: 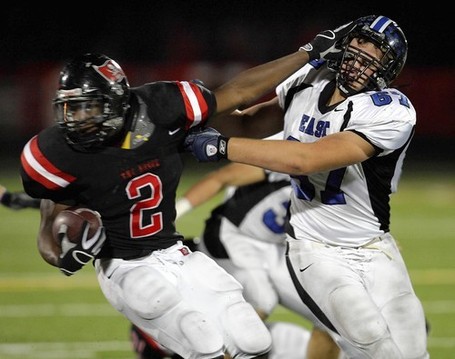 From Zero to Several ($)

Bolingbrook is an extremely good football program, and I can definitely foresee Hellams committing to the Huskies sometime during the recruiting process.

Reason #1: He's got that prototypical MAC Linebacker size at 6'1" 220.  It's nothing special, but will get the job done and he has a chance to gain more muscle on that frame to play on the inside.  He may not be big enough to get a lot of BCS offers.  We're going to need a lot of help at linebacker after all of the players graduating after this year.

Reason #2: His other offers are from Colorado State and Wyoming, teams that we consistently beat in the recruiting game year in and year out.  He hits with reckless abandon on his highlight video and I'm sure he's got the speed that Coach Kill is looking for or else he would have never offered him a scholarship in the first place.

In other recruiting news

Our earliest offer was to do-it-all skill player WR Nick Jones out of Byrnes HS in South Carolina this past year.  He has high hopes of playing for Spurrier instate at USC or even at Penn State.  We're his backup choice, because as of right now he has no intention of leaving for the midwest.

As for QB Sean Robinson out of Rochester, IL he has absolutely blown up in terms of recruiting attention.  Although we were one of the first schools to offer him, he has since received offers from Iowa, Iowa State, Northwestern, Stanford and the like.  Do yourself a favor and check out his highlight video.  It's absolutely insane how good this player is.  I want him so bad though to play for the Huskies, as he is the dream QB for Coach Kill's system.  DE Louis Trinca-Pasa is another recruit that we recently offered that has been 'hot' on recruiters radars lately.

Keep up with all of the players that we've offered so far on the 2010 NIU Football Recruiting Big Board, permanently located under special pages on the left toolbar.