After openly interviewing for the job earlier this month, Associate Head Coach for the NIU Men's Basketball team Dennis Gates (bio) is gone from the Huskies to the Wolf Pack of Nevada.  The hiring actually took place around two weeks ago according to a source close to the team. 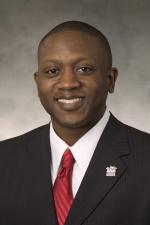 Gates' pedigree at Northern is...well short but sweet.  He rose fast in only one year, being named the Associate Head Coach at only 28 years old this past year.  Last year Gates was an assistant coach for Reach USA Basketball team, whose romp in China was cut short by earthquakes. One of his main duties included mentoring such NIU Guards such as Jake Anderson and Mike Dinunno.

He was also known as a "recruiting guru", specializing in the Chicago area.  His list of recruits reeled in include PGs Bryan Hall from his alma matter Whitney Hall and Dinunno as well.  Just this past year he was instrumental in recruiting the highly-touted Tony Nixon, our only class of 2009 signing.

The Nevada situation is that they are trying to replace positions after their Head Coach Mark Fox left to be the new coach for the Georgia Bulldogs.  Nevada's new head coach David Carter was Associate HC for the Wolf Pack since 2004 himself.  Nevada is a consistent 20-25+ game winner every single year, but plays in the perennially weak Western Athletic Conference.  Gates has extremely high goals for himself in the immediate future, and he feels that he can do so better moving out West closer to his Alma matter in Cal.  I can foresee NIU sometime in the near future becoming a school like Nevada, racking up wins in the MAC with postseason appearances every year.  Interesting note is that Nevada AD Cary Groth had the same position at NIU until 2003.

This is disappointing for Huskie fans in that Gates was a rising talent, maybe rising too fast for Northern Illinois to keep him.  I speak for most of Huskie nation in that I would like to have seen Gates become head coach for whenever Ricardo Patton left for a different job.  I guess that won't be the case anymore, and we may be recruiting against Gates in the Chicago area for possible recruits in the near future.

Thanks Gates for your time as a Huskie!  Hopefully your efforts here will be remembered for some time to come.