Toledo Rockets launch into the Twittersphere

Share All sharing options for: Toledo Rockets launch into the Twittersphere

Is that even a word?

Newly anointed Toledo head football coach Tim Beckman is the first Mid-American Conference coach to join the craze, but it doesn't stop there.

The Twitter family of Toledo, OH extends to include their Recruiting Coordinator/Running Backs Coach, their Associate AD and even their Video Coordinator.  Not to mention they have an official feed for the whole Toledo Athletic Department.  Is their waterboy next?

Luckily, Beckman falls in to the Tim Brewster mode of being overly excited about things in all of his "tweets", making it some interesting fodder to read.  The Zooker is on there as well.

We're talking an average of 4 exclaimation points a post, sometimes 5 in a rare occasion.  Here's a good example of the 5 exclamation point tweet:

Great event Barnes and Noble! Special thanks to the Mayor and Coach Lauterbur! Good time! Finished week #1 in fashion! A lot of players!

Anyways, he's on Facebook too, while also recently launching CoachBeckman.com

However, Coach Kill is about as old-school as it gets, and I don't see him resorting to this...well ever.  I think having the last name Kill gets you enough attention without having to resort to something as ridiculous innovative as twitter.  Could see Recruiting Coordinator/WRs Coach PJ Fleck doing it, but that's about it.  Would be nice to see an official one from out athletics department.  The NIU Women's Basketball Team appears to be twittering, as is player Kylie York.  But that's about it.

Who is Beckman kidding?  He'll never be able to fill out Toledo Rockets garb like good 'ol Tom Amstutz used to.  Although in this picture, he's larger then the entire Glass Bowl!!! 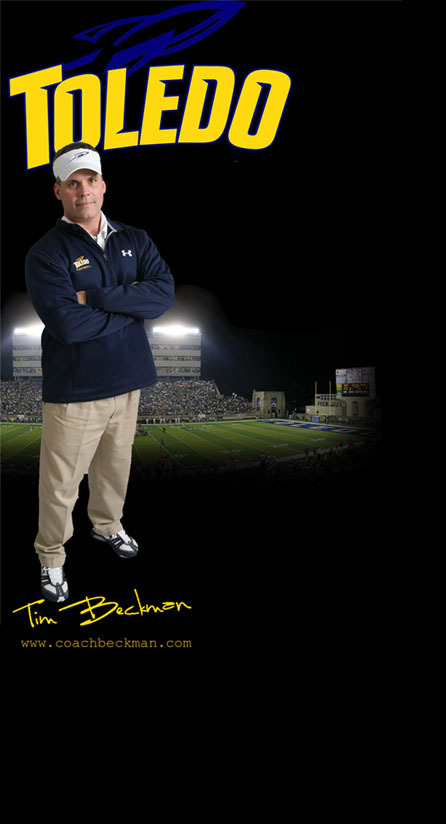 Tim Beckman, larger than life.  As if I needed another reason to hate the Turdledo.  As for Toledo blogs to visit and trash talk against, Midnight Blue and Gold is available even though they are more of a news aggregator than anything.  Disappointing.  Guess we'll have to settle for the Toledo Launchpad, Digest or even the Rocket Report unless there's something else out there.

Oh and I guess this is a good time to pimp my own twitter account: @RABAttack.  Up to 330 followers!  Make sure to also follow John Sahly of the Daily Chronicle @huskiewire as well