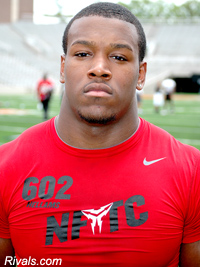 It's an exciting day in Huskie country as LB Mike Hellams (Rivals) of Bolingbrook, IL becomes the first commitment for the 2010 Football recruiting class!  A month and a half ago, I speculated that Hellams could quite possibly commit to the Huskies, not knowing that he would be our first verbal.  Here's what was said:

Bolingbrook is an extremely good football program, and I can definitely foresee Hellams committing to the Huskies sometime during the recruiting process.

Reason #1: He's got that prototypical MAC Linebacker size at 6'1" 220.  It's nothing special, but will get the job done and he has a chance to gain more muscle on that frame to play on the inside.  He may not be big enough to get a lot of BCS offers.  We're going to need a lot of help at linebacker after all of the players graduating after this year.

Reason #2: His other offers are from Colorado State and Wyoming, teams that we consistently beat in the recruiting game year in and year out.  He hits with reckless abandon on his highlight video and I'm sure he's got the speed that Coach Kill is looking for or else he would have never offered him a scholarship in the first place.

I am extremely excited to get this type of quality player in to the Northern Illinois program.  Hellams had offers from both Colorado State and Wyoming and was recently ranked as the #22 prospect in Illinois by EdgyTim.com in his May rankings.  Here's his highlight video for a reminder of how much of a beast this player is.  Can you say form tackle???  Even though he won't arrive on campus a year from now, I already have a nickname saved for him: Mike "Hellraiser" Hellams.  Can't wait.  Congrats on committing to the Huskies.

Recent NIU signee Jordan Lynch starts his preparation in Canton, OH as part of the USA Junior National team.  Lynch will play Safety as one of the 45 players selected for the Junior World Championship, which takes place June 27th to July 5th. 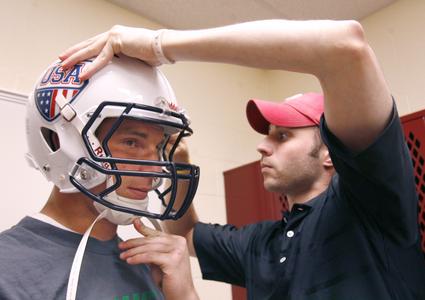 "They came to the gym to see if they were interested (in me)," Sutter said. "I then went on a recruiting trip (to NIU) and I liked the other teammates, the campus and they are strong in my major of physical therapy."

First-year Tennis Coach Pawel Gajdzik managed to sign the top-ranked Mid-Major recruiting class in the nation, signing international players from Croatia, Poland, Bosnia & Russia.  Why did they choose this route?

"Recruiting will continue to be the lifeblood of our program and with the right mixture of national and international flavor; our team will be able to accomplish great things for NIU. At the time of my arrival in DeKalb last summer, most of the players from the U.S. had already committed to their college of choice for the 2009-2010 season. It is my hope that this recognition will allow us to draw interest from players in the Midwest, especially in the Chicago and Illinois area for upcoming seasons."

The Daily Chronicle's John Sahly sat down with head men's basketball coach Ricardo Patton about a variety of topics.  It's a good read, so make sure to check out both Part I & Part II.

On Jake Anderson's decision to enter the NBA Draft:

RP: I only say that because he hasn't said that to me. So, we'll just have to wait and see. ... I don't believe he had any workouts. And I see where the guard from Villanova (Scottie Reynolds) took his name out yesterday. He was a pretty good player. From all indications, Jake didn't have any workouts with any teams, and so you would expect if that's the case that a guy would realize that he probably ought to come back to school.

I will tell you this: For me, Jake's decision should be more about his long-term future, not just about basketball, but about life. That's what I've talked to him more about, is life.

RP: I think that the sky's the limit for Tony Nixon. He's a guy that I think will be able to make big shots for us. Because that's his M.O., he's going to be closely guarded. This summer he'll have to spend a lot of time working to move without the basketball. He'll have to get his shot off a lot quicker at this level because guys can close out a lot better and a lot quicker. Those are all things he'll have to learn and hopefully he'll learn some of that this summer and certainly this fall.

He's a big guard, which is what I like. If you look at some of the guards we've had in the past, particularly on the wings, they've been small guards, Michael Patton-size (laughs). And that's not just on our team but also on a few of the teams in this league. But I think when you can start adding guys on the wing that are 6-5, like an Xavier Silas, like a Tony Nixon, I think it makes for a good recipe.

Dennis Gates' replacement was named as Todd Townsend was recently hired to become a new assistant basketball coach for the Huskies.  Townsend played at Marquette, graduating in 2005 where he became Director of Basketball Operations.  This past year, he was an assistant for Northeastern.

Townsend has strong Chicago roots, having played high school basketball at Morgan Park High School in Chicago prior to transferring to New Trier High School in Winnetka, IL for his senior year.  He has strong people skills, an outstanding work ethic and a personality that easily connects with players at the high school level.

The first round games of the MAC Basketball Tournament format has been changed so that higher seeded teams will play games on their home courts, rather than all 12 teams heading to Cleveland, OH.

"This class is going to compete right off the bat, and that's saying a lot with a very strong returning group highlighted by eight seniors," Simmons said.

Despite not being picked up in the MLB Draft, Jordin Hood has been tearing it up for the Quincy Gems of the prospect league.

Through five games, he is hitting .450 with two home runs and 13 RBI and has made a couple of dazzling defensive plays.

NIU's all-time hit leader 1B Scott Simon was released by the Rockford Riverhawks.

Around the MAC & CFB

In The Bleachers is running a countdown of the top 50 non-BCS players.  Ball State WR Briggs Orsbon is ranked #47 and EMU QB Andy Schmitt chimes in at #46.

Recruiting guru Tom Lemming preaches that in the recruiting game, patience is key:

The Big 10 has suffered in the recruiting process in the past because, unlike the more dominant SEC or Big 12, conference members usually complete their recruiting before the players finish their senior seasons. Consequently, they can't recruit kids who are late bloomers and have outstanding senior years because they have filled their recruiting classes. For whatever reason, the Big 10 is guilty of this practice more than any other major conference.