Jake Anderson (thankfully) pulls out of the NBA Draft

Share All sharing options for: Jake Anderson (thankfully) pulls out of the NBA Draft 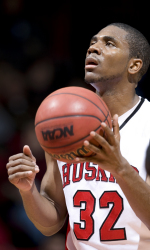 Honestly, I don't think anybody thought the 2nd Team All-MAC performer would leave for the draft other than your typical message board conspirator.

I'm not going to bash him in any way, shape or form but an explanation is needed for this failed experiment.  HuskiePride.com reported that he pulled his name just hours before the deadline.  Was there any need to do this?  Jake couldn't have done this days earlier?  He had zero workouts with zero teams during this entire decision-making process.  That didn't tell him that he had made a bad decision?  Head Coach Ricardo Patton was completely against the decision according to John Sahly's interview the other day, striking down any thoughts of the possible pushing-out of Jake.

This isn't good PR for the team in any way.  I can see the way that this is going to go, though.  I doubt Anderson or Patton will have any more say in the situation.  Jake Anderson has to open up and say what is on his mind.  This entire act is a distinct sign of immaturity, when Jake needs to show up next year and be a leader.  It was probably no big deal, but Anderson was suspended for one game last year for undetermined disciplinary reasons.  This may have just been an aberration, but its extremely hard to win games when your best player isn't playing.

Darion "Jake" Anderson couldn't initally make it in to NIU after he graduated from high school in 2005, because he didn't qualify academically, so he spent one year at a prep school.  He was able to redshirt during the 2006-07 year, still trying to become academically eligible.  Jake went on to lead the Huskies in scoring these past two years.

He's 22 and will only be a Junior for this upcoming season.  I guess that may have been part of his decision-making process.  Declaring would have been a mistake, we all know this.  Anderson could have latched on somewhere overseas, but returning to play for Northern Illinois and getting his degreee is better for his personal future.