Diesel Fuel: Kill recruits yet another assistant to Dekalb

Share All sharing options for: Diesel Fuel: Kill recruits yet another assistant to Dekalb

The last piece of the puzzle is here... 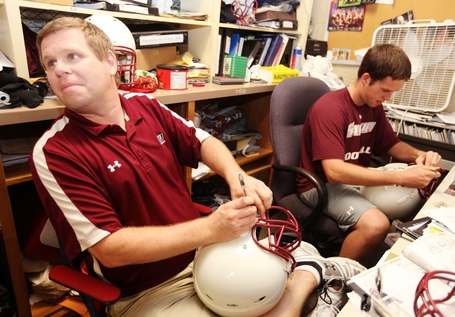 Equipment Manager Alvy Armstrong will make the trek up from Southern Illinois to join the Huskies this season.  Armstrong joined Coach Kill at SIU in 2001 hailing from Youngstown State.

However, I doubt any BCS schools would want to waste their time or hurt their schedule strength by playing ISU, who has won exactly 1 game since 2005.  Yes, you read that right: 1 win from the 2005-2008 seasons.

Rivals chimes in with their NIU preview, placing the Huskies at No. 77, right next to No. 76 Purdue.

Summer baseball is starting up and NIU Third basemen Troy White is playing for the Waterloo (IA) Bucks of the Northwoods League.  He's hitting .213/.333/.230 through 19 games already using the wood bat.

In the Bleachers continues their countdown of the best non-BCS players with No. 39 Central Michigan DE Frank Zombo.  Possibly the best name in the MAC.