Share All sharing options for: NIU burned by EA Sports yet again

If there's a game that defines my high school days, it's the NCAA Football series of video games.  When the PlayStation 2 came out, one of the first games that I picked up was NCAA 2002 with Chris Weinke on it.  It was love at first sight.  At this point in my life, I wanted to play college football, just because I would be featured in these NCAA games.  It was a rush for me to play as players I knew that played at NIU or other colleges already.

I loved running the dynasties with Northern Illinois culminating in their rightfully deserved BCS games and National Championships.  I haven't played the games in a while because A. too broke to buy the new game every year B. was focusing too much on "studying" at the time or C. I don't even own one of those new-fangled X-Box 360s or PS3s.

Then I see this video posted about what Huskie Stadium will look and feel like in the upcoming NCAA 2010 game.  Having faith in EA Sports is never a good idea, as they have burned me several times in the past.  So, did they get everything right this time?

That's a big FAIL by EA Sports.  WHOO the marching band lines up in the N logo before the game.  That's new, but...THAT ISN'T OUR FIGHT SONG.  What is the point in adding the pre-game band to the game if they aren't playing the right music that rings through the heart and soul of Huskie Nation?

I'll make it simple for you, EA: go to the Villiage Commons Bookstore website and you can buy the 2008 Huskie Marching Band CD right here.  You don't even have to do that.  Just download it from the official NIU athletics website.

Enough about the band, why is there an extra fan section in the north endzone area?  Haven't they heard of the Yordon Center?  It opened at the beginning of the 2007 SEASON! and was in the works much longer than that.  Here's a picture of what it should look like: 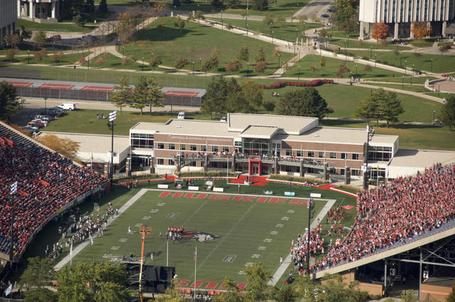 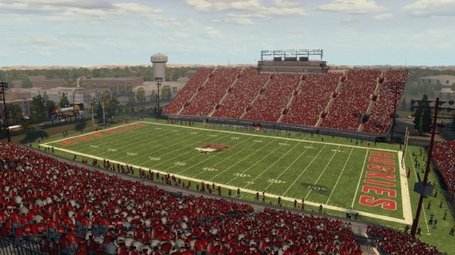 They also haven't added the greatest mascot in the history of collegiate athletics: Victor E. Huskie

To sum it up, EA needs to add these components for me to go out there and buy their next game:

1. Get the Stadium right with the addition of the new Yordon Center

2. Add the Huskie Fight Song to the mix