Initially, I was a bit shocked reading this headline. Especially after the last two years experiencing the lack of QB depth that gave us a taste of QBAPOCALYPSE! here and there. Dan Nicholson going down in '07 (numerous times) & Chandler Harnish going down in '08 were perfect examples of how our depth at the QB position slowly evaporated into thin air ever since Phil Horvath graduated in '06. (Say what you want about the Horvath/Nicholson combo, they were above average in my opinion.) This is not our first quarterback transfer. Check out this NIU1981 article to find out where Huskie signal-callers from the past have departed to.

Well yes and no. Gone is our definite 3rd string quarterback, that is a fact of life. Brandon Rogers provided a sense of hope for those that either don't have confidence in Harnish and/or felt that we had a potential superstar on our hands if he developed enough through time.

Turns out he didn't want to waste any time waiting behind Chandler for playing time. Looking at the eligibility chart, he would have to wait until he was a senior to see any sort of significant time on the field being only a year behind #12.

In high school, Rogers was a late bloomer coming out of a top high school program in Tulsa, OK. He put up big number his senior year, so his only other offer was from Eastern Michigan. He also committed to Northern Illinois just before signing day, so there wasn't a long relationship or process of us recruiting him. The last minute decision might have been a wrong one and Rogers wants to find somewhere with a better fit for him. You can't really blame the kid. Kill's slowly decaying 2008 recruiting class is down from 13 to 10 players now still with the team.

So here's the current QB depth chart we're left with: 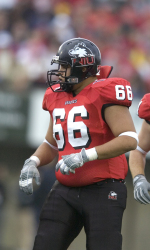 RS Senior OT Tony Holmes. Holmes played in just the blowouts last year as a backup along with the Central Michigan game interestingly. Was a running candidate to position himself on the right side of the offensive line this spring, but became the odd man out. The special teams presence by the native Minnesotan will be missed, along with his ability to intimidate other opponents. He was our biggest player at 6'6" 330 lbs!

RS Senior LB Zach Larsen. Larsen played sporadically through 5 of the first games of the season, but was unheard from after the Miami game (injured?). 2007 was his year, grabbing a whopping 59 tackles in just the last 7 games played! He also forced and recovered two fumbles while winning the most improved player award. I've always been a fan of his hair, but he has already earned a marketing degree and is ready to move on. While there is already strong linebacker depth, this provides more of an opportunity for a freshman to come in and make an impact.

RS Junior DE Jason Cruikshank. Apparently somebody liked the facebook status that he was retiring. Some people. A former LB turned DE undersized at 6'3" 220 lbs, Cruikshank was relegated to special teams duty, but saw action in 10 games last year including the bowl game. Cruik was a walk-on that I don't think ever received a scholarship. One of my favorite last names ever, his most recent facebook status rings of a possible career-ending injury.