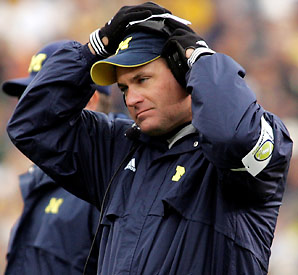 Things must be going rocky up in Ann Arbor.  First off, 4-star offensive tackle Dann O'Neill decided to ditch the Wolverines for Western Michigan to join his brother James who plays TE for the Broncos.  Why else did he leave?

"I don't think I fit as well (at Michigan) as I fit with Western Michigan's system," the 6-foot-8, 300-pound Dann O'Neill said, citing the Wolverine's new spread offense under coach Rich Rodriguez, which calls for smaller linemen. "In high school we ran the spread, but we ran a different spread. I'm not sure it was the right offense for me to run.

O'Neill is a hell of a get for WMU.  He was ranked as the 10th best OT and the the 49th best player in the country for the class of 2008 according to Rivals.com

Not to be outdone, Ball State goes out and gets themselves another refugee from the Maize and Blue.  What is going on here?  Kurt Wermers is an offensive guard from Northwest Indiana, but that doesn't place him any closer to Muncie than it does Ann Arbor.  He was a little more harsh with his reasoning:

"I figured I'd get out while I could."

"It was fun, a great school and I loved my teammates. But if I'm not happy every day that I wake up, why keep doing it?"

Wermers is a 3-star that had offers abound and the Cardinals need all the help they can get to build their offensive line back up after losing 4 starters to graduation.  A reader of Maize n Brew has an interesting point of view:

What is is about our offensive linemen being such babies about why they're transferring? First Boren left and cried about how hard Mike Barwis was working him in the weight room, now Wermers, and I'm sure we can expect a cry-baby article from Dan O'Neill any day now on why he's fleeing from the big, mean Michigan coaches to Western Michigan. As a Cardinals fan, I'm happy that we have a talented player like Wermers coming to our team, but it's disappointing that Wermers couldn't admit the obvious: he was recruited for another style of offense, was buried on the depth chart, and likely to get passed up by the 2010 offensive line recruits.

Both players will sit out a season and then have 3 years of eligibility to wreak havoc on the MAC West division in the future.  Does Rich Rod have any extra players that want to come to Dekalb?  We're gonna need some extra linemen pretty soon.  You ever heard of Ryan Diem?  Doug Free?  You can block for our next great running back...