As the majority of us are getting our grills ready for the 4th of July, prospective student athletes are looking hard at where they stand in the recruiting game. Long-time recruiting guru Tom Lemming rings in with some advice from his Sun-Times Blog:

Remember, June is the most important month for offers. Kids who have only one or two offers attend one-day camps in June. If you have no offers by July 1, then it is time to worry and to get aggressive in the recruiting process. If you don't have an offer by then, there must be a reason why. Maybe you have to cut your dreams down. Not everybody can play in the Big 10 or SEC. Look at the MAC or Gateway Conference.

Lemming wasn't kidding as there seems like a slew of prospects have committed recently to their lucky suitors.

Most notably, Cornerback Jeff Garrett out of Ben Davis HS in Indiana has committed to the Huskies. 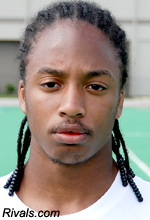 Garrett is on the smallish side at 5'9" 170ish, but has good quickness...or does he? He has combine numbers all over the place. Let's take a look.

Rivals says he runs a 4.5 second 40 time, which is probably straight from Garrett's mouth. Scout says he runs a 4.58. This sounds more reasonable, he must have been rounding down. However ESPN says he ran a 4.69 and jumped a 40" vertical at the same combine. I think they may have the 40 time a tenth of a second higher on accident. The 40" vertical is impressive if true. I wonder why they don't list it on the Scout site? 4.25 is great for a shuttle time.

Whatever the discrepancies may be, I'm excited to have Jeff as a new member of the Northern Illinois football team unofficially of course. It's pretty awesome Scout has him ranked so high as the #65 ranked CB in the entire nation. Not to mention we beat out some good MAC schools that were after him in Akron, BSU & Ohio.

That's the good news. The semi-bad news is that we lost out on a lot of other prospects that we had offers extended out to, including 3 in-state prospects...

Part of me feels like I should be used to this disappointment, but I remotely thought that Coach Kill could pull off some recruiting miracle this year and beat out Big 10 schools here and there for prospects. A reality in check is in place. As soon as I speculated on a possible revolution out of Wisconsin, the Golden Goophers come from the West and pluck up three different prospects that NIU had their sights on.

The most troubling thought out of all this is that all three of these prospects lost to Minnesota were linemen, arguably our biggest need in recruiting for 2010. It's not a complete wash, however. DT Zac Epping had us in his final three choices. The important thing is making relationships and getting our name out there, because who knows what kind of impact we can make come a couple potential successful seasons in a row. Novak never even entered this type of recruiting territory when he was head coach, recruiting against the big boys. Are you a fan of Kill's aggressive recruiting approach, or do you think we should take a step back?

He said Wisconsin does not rank high on his list. His top 3 are Minnesota, Northern Illinois, Central Michigan. Wisconsin wanted him to go to their one day camp that was earlier this week and he turned them down and in his own words basically ruled Wisconsin out of the picture.