Phil Steele on the MAC Pt. I: The Returning Production

Share All sharing options for: Phil Steele on the MAC Pt. I: The Returning Production

OK, so if you don't know who Phil Steele is at this point then well you are missing out.  The man is a college football genius, almost a mad scientist of sorts.  His 328-page preview is the best you can buy out there, bar none.  There's SO much information for every single team.  MAC teams get as much coverage as SEC teams do, which is a big part of what makes his magazine special. 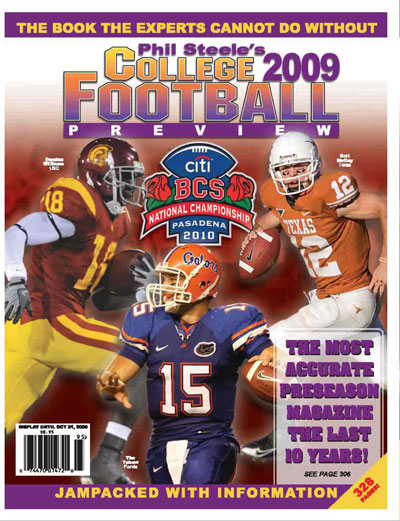 He's recently made a decent foray into the world wide web with his Daily Blog and a new spot on the Orlando Sentinel.  He's pumping out so much information that it's becoming pretty hard to keep track of.  I'll try to sort it out.  First we'll start off with the lists he's published for the OS College Gridiron 365 blog:

The most interesting thing to note here is not how good teams will because of the fact they return a bunch of starters, but instead its important to focus on the losses.  Western Michigan's minimal number of returning tackles is probably the most troubling, because they are ranked as the 2nd best team in the MAC.  Last year the Broncos weren't even in the top half of the conference in Total Defense, so this could be a serious Achilles heel.  Wisconsin is also showing some pretty big losses.

Eastern Michigan and Miami OH didn't even have decent defenses last year, so more losses result in both of those teams are ranked in the 110's coming in to the season.  Bowling Green's huge losses combined with their coaching change is a big reason why Steele is very down on the Falcons this year.

Looking at the top-teams in this list, I believe that Temple & Buffalo will have two pretty good defenses this season.  Toledo also has to break in a new coach and Central Michigan always struggles on defense, so who knows if we'll see an improvement this season.

% of Yards Returning for Offenses

Miami OH at the top has to break in a new coach and loses 3 long-time starters on the O-Line.  This statistic for Ohio is a big reason why Phil Steele likes them to win the MAC East.  Eastern Michigan is 'stacked' on offense, but that will only do so much good when their D is going to be horrible and guess what?  New coach.  Were you aware that NIU has more returning yards than both CMU & WMU?  Yeah, me neither.  Ball State and a bunch of East schools are looking at a big drop off on offense due to QB losses mostly.  Just glancing at that Purdue stat makes me hungry to get to West Lafayette to face the Boilermakers.

Not too much to say here.  NIU is ranked low, but I'm not too worried.  Not to be negative or anything, but a lot of the guys that left weren't very productive during their careers and were part of the old regime.  Toledo's percentage is just ridiculous and with all their returning players, its no wonder why Steele has the Rockets ranked ahead of the Huskies in the MAC West.  CMU returns an impressive 81.5% after winning the MAC LY.  That's why they are the faves again.