The 2009 MAC Media day was...well let's just say interesting.  I had low expectations and the day failed to even match those.  Here is a summary of the event in 3 parts

The first thing reported about the media day was the preseason poll.  The poll isn't comprised of the coaches, rather by two media sources for each team: 26 voters in all.  Here are the anti-climactic results

Whaddya know.  The West is almost too easy for preseason prognosticators to predict.  As for the East?  Buffalo is the safest pick (but not the wisest) because they won it last year and have a decent amount of talent coming back.  Temple has an unbelievable defense, but a completely unproven offense.  I really like that Akron got placed third in this poll.  I feel like they are extremely underrated coming in to this season.  They can have an elite offense, but their D is going to have to stop somebody.  Combine that with their new InfoCision Stadium opening and you have yourselves a surprise team.

Huskie FS David Bryant has this good point to say about CMU & WMU:

I'm going to defer to Kyle Warber of FUC (Fire Up Chips!) for this one:

MAC Media was nothing more than all media days in our current cultural climate: cliches, coach speak, and very carefully worded statements by players who have been prepped by public relations coordinators.

Here is an example of the cliched give and take that took place today:

"Which team are you looking forward to playing the most?"

"We are looking forward to the first team we play....the first game of the season. Division 8 Hickstown State has a new coach and those kids really get after it. We aren't going to take them lightly."

All you have to do is poke around the internet and you find out that nobody gave a rat's ass about MAC Media Day as a whole other than John Sahly of the Daily Chronicle (here and here) and Kyle Warber (here).  I commend the two of you for the coverage you provided of this underwhelming event, no matter how painful it was to attend.  Yes you read that right: ONLY 2 beat writers out of however many there were in Detroit so much as cared to put a decent article about the event online.  The majority of articles I read were just "blah, blah, blah here's the preseason poll [insert coach's quote about how polls don't matter]" and that was it.

Coaches talk about Twitter.  Thank goodness Coach Kill isn't on there.  I agree with this point he makes:

"I’m working on a couple of other things," Kill said. "I would if I thought it had any benefits. But I’m not convinced it’s benefiting recruiting."

Toledo HC Tim Beckman provided interesting anecdotes like this one throughout the day:

He spoke about a letter he received from an 8 year old from Toledo. In the letter was a diagrammed football play that the 8 year old was confident would help Toledo win games. It was an interesting story and his comfort level and unique answers made for the most refreshing interview of the day.

Facial Hair.  Coach Kill was somebody else cleaned up without a mustache and QB Chandler Harnish was rocking some sort of a goatee that extended from his sideburns.  Temple DT Andre Neblett had that Kimbo Slice look going with his full beard.

The Online Broadcast (aka The Epic Failure)

You all know that I was not able to attend the MAC Media day this year because of extenuating personal circumstances.  I was fine with this at first, because I was excited that they were broadcasting the entire event free on MAC-Sports.com

It seemed reasonable enough.  I was excited to see the new coaches talk to the media.  How would they come across their first time in a big spotlight?  I wake up a little bit late, but catch most of Ohio and then Temple came after them.  I just wanted mostly to see the MAC West coaches and players talk with that one guy that was interviewing them.

Problem was, the video stream was TERRIBLE.  The video would buffer and reload the video every few seconds, deeming this live stream close to unwatchable.  I have a good internet connection and never have problems streaming video like on youtube.

I'm extremely disappointed at the quality of "All MACcess".  I couldn't imagine watching an entire game on there if it is with the same quality video streaming.  I'm no tech expert, but All-MACcess (all-crapcess) uses Microsoft Silverlight, a much criticized web application.  MLB.com dropped Silverlight last year and replaced their on-demand video streaming with Adobe Flash, providing a much more reliable service.

After this, I thought "OK, they'll probably post the videos up for viewing anytime afterward."  This turned out not to be the case.  The faulty live feed is all that you get.  Sorry! If you weren't at media day or couldn't hear half the things people were saying because of the faulty streaming.  That's a one-time deal. TOO BAD.

Compare and contrast this to the non-stop coverage of the Big 10 Media Days on the Big 10 Network.  In addition to that, videos from that event were posted online right away.  We couldn't have simply got transcripts of any of these interviews?  It's just simple things like these that the conference has to get right to become a major force in media. 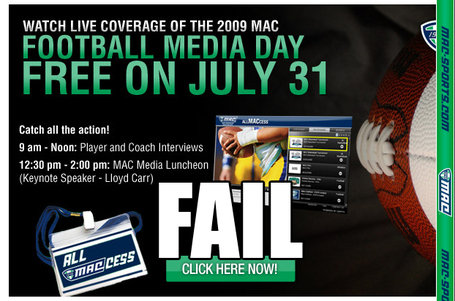 Ultimate Highlight of the Day

Just the gross amount of technical difficulties that define any MAC event. Boom microphones falling into the camera shot, cameras jerking around as if Michael J. Fox was behind the lens. The live feed timing out (for every 20 seconds of live feed televised over the Internet you got 30 seconds of frozen screen). Wireless microphones went out on the coaches as they were talking.

Western Michigan coach Bill Cubit wasn't even featured on the Internet feed. The event was programmed to last until 12, so that's when the live stream cut off ...at 12 pm.

Nobody was able to anticipate the interviews going long?

So every single Western Michigan fan who planned on watching over the net was out of luck. That not right.

To make matters worse they had to refer the streaming feed with the corny name All "MACcess." More like "All-Frozen-Screen-Access"

But as Jake Gittes was told at the end of Roman Polanski's "Chinatown" to sum up the hopelessness of the human situation:

"Forget it Jake. It's Chinatown."

Forget about expecting it to get better.

So it wasn't just me that had all the gripes.

I guess next year I will have to attend the event myself to get any sort of satisfaction instead of the immense disappointment of this year's events.