Throughout the off-season, I have been peeking in any preseason magazine that I pick up to find out what the rankings are for NIU and their opponents for this season.  I'm not a huge fan of preseason polls, but its interesting to see which teams the media respects or if they follow the Mid-American Conference whatsoever.

Athlon & Phil Steele were the only preview magazines that had rankings.  Lindy's simply does not pay attention to the MAC and throws rankings around like darts on a dartboard, so they are not included in these rankings.  The Sports Illustrated CFB preview just came out - go pick it up.

The Quad Blog is part of the NY Times.  Rivals & College Football News are both respected and highly trafficked websites.  This is for their rankings in terms of all of college football.  If you are just interested in rankings within the conference check out this website.  There is a lot of disparity between the two if you look at it. 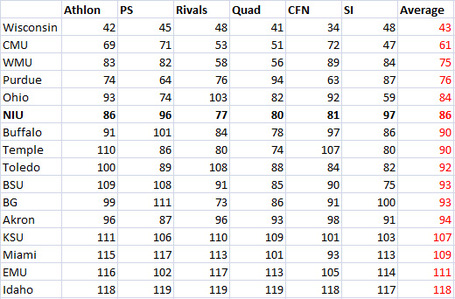 The first thing to note here is the teams at the bottom of the chart.  Northern Illinois plays Idaho, EMU & Miami: all of which are in the bottom 10% of teams in the nation.  Plus we play Western Illinois, who is a mediocre FCS opponent this year and doesn't even rank in the top 40 of their own division.  Despite 4 likely wins, this is not good for our SOS.

The middle of the chart including Buffalo, Temple, Toledo, Ball State, Bowling Green & Akron all are within 5 spots of each other.  That's a lot of bad parity.  The surprise team out of that group could be Toledo with all the talent that they returng, despite having to break in a new coach.

NIU has a pretty good ranking, just behind MAC East favorite Ohio.  The Bobcats are the MAC East favorite in only two polls (PS & SI), but still rank ahead of every single team in their division.  I'm huge on OU this year and they are the biggest sleeper in the conference.

Purdue is behind two MAC West opponents and are certainly beatable this year.  We are also lucky to get WMU at our home stadium this year.  CMU is obviously far and away the favorite in the MAC this year and the consensus is pretty even-keeled on Wisconsin.

According to the chart, NIU should have a 7-5 record this year at MINIMUM.

Have any thoughts or did I miss any polls?