Simply put, Bucky's 5th Quarter is the the best Wisconsin Badger blog out there.  I asked them a few questions recently to get a gauge on how the Badgers are doing as camps are letting out and school is starting.  They're nice, let me do a podcast and are very knowledgeable about our friends up north.  13 DAYS PEOPLE!!! 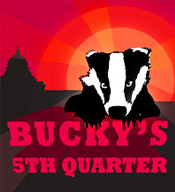 Red and Black Attack: The Quarterback.  That's all anybody want to talk about this off-season.  Who do you like most to be named the starter and who will Bielema pick?  What are some of their qualities?

Bucky's 5th Quarter: I got a chance to watch practice Wednesday and I think the competition might already be over. By my count redshirt freshman Curt Phillips took 61 percent of the snaps, while Dustin Sherer, last year's starter, took less reps than junior Scott Tolzien who might be named the backup. This is somewhat surprising because it sounded like Sherer would be the guy when camp opened, but Phillips has made a nice push for the job, which is encouraging because none of the quarterbacks did that last season and the results during the season weren't pretty.


RABA: Is the QB position even going to matter that much with John Clay and friends in the backfield?  With all the offensive line shuffling and injuries, is this a typical successful Badger offensive line in the making?

B5Q: Three offensive linemen are out with injuries right now, including Gabe Carimi who is one of the best tackles in the conference, but all three should be healthy in time for the season opener. Meanwhile, a few young guys are opening some eyes while they fill in with the No. 1 offense. In fact, true freshman Travis Frederick is pushing for the starting job at center. If everyone gets healthy and stays healthy this should be a very deep and talented O-line. John Clay and Zach Brown should have no trouble running all over defenses this season.

RABA: Are there a lot of worries about how your front seven will do this season with all the losses to graduation?  What are some names of players that we should watch out for this season?

B5Q: There are a ton of questions regarding the front seven, especially at linebacker where Culmer St. Jean and Blake Sorensen are taking over, but not exactly turning heads in camp right now. Watch out for J.J. Watt, however, on the defensive line. He's a sophomore defensive end and he's been impressing the coaching staff since spring ball. They expect big things out of him this season.


RABA: What is going on with Safeties Shane Carter & Aubrey Pleasant?  How will these suspensions affect the defensive secondary and will they play in the first game against the Huskies?  Is the starting secondary something to be feared this season?

B5Q: No one really knows what is going on with Carter and Pleasant. Usually I hear a few reliable rumors regarding these type of situations but I haven't heard anything and the fact that they are talking about hiring lawyers makes this a very interesting situation. Neither player is an incredibly good safety, but it definitely hurts the depth of a secondary that needs all the help it can get. Carter and Pleasant started as sophomores, lost their jobs as juniors and now are off the team for the time being. Not exactly the progress you want to see.


RABA: Is there a lot of buzz for Wisconsin coming in to the season?  What are the expectations in Madison and will any of these off-season distractions seriously affect the team's psyche?  How do you feel about Bielema at this point and what does he have to prove?

B5Q: I think nine wins would be a successful season and take some of the heat off of Bielema's back. With a pretty easy schedule a bowl game should be easy to reach, but there are no guarantees if we see the team that took the field last season. The biggest thing Bielema has to prove is that he can improve the mindset of his football team and avoid losing an entire season because of a couple bad losses. He also can't commit some of the coaching errors he did last season.

Thanks to Adam Hodge for answering these!