Starting NG Mike Krause out for the season with heart ailment

Share All sharing options for: Starting NG Mike Krause out for the season with heart ailment

It's remarkable that something this serious can happen just like that 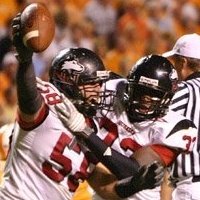 "Mike had a situation this summer, a heart situation," Kill said. "Right now, Mike will not be able to play this year. What we'll do is medical[ly] redshirt Mike and he'll be reevaluated and he's still a part of our team and helping us out in other ways. He just has a situation that we need to be very cautious with. Mike's health is a lot more important than the football field."

"It's hard on Mike but he's such a team player and he's out here helping us out," Kill said. "He'll bounce back, but [I] really feel bad for him."

Sound familiar?  Former Huskie RB Thomas Hammock had a similar occurrence way back in 2002 when a heart problem ended his career after beating Wake Forest in the season opener.  Of course this led to future NFL star Michael Turner getting extra carries early in his career.  Funny how things like this can turn out.  Thomas Hammock ended up coaching the running backs at NIU for a couple years until ending up at Minnesota still coaching what he knows best.

Well according to the Media Guide depth chart, the next man out there is redshirt freshman Brian Lawson.  Lawson is similar in size at 6'3" 272 and was a little under the radar coming out of high school.  However, he was all-state in football and was also a star in both wrestling and track at Rich East HS.

Also glancing at the Eligibility Tracker, true freshman Zach Anderson (6'2" 298) has a chance to come in and make an impact right away at DT.  He had offers from Indiana & Iowa State, can dunk a basketball and was also a stud wrestler just like Lawson.

Hopefully Mike Krause can recover fully from this problem as he will take a medical redshirt and become a force on next year's team.

With nose guard Mike Krause out for the season, Kill said NIU might rotate just three interior defensive linemen (presumably D.J. Pirkle, Adam Coleman and Brian Lawson) at the start of the season but that number could increase to five.

Redshirt freshman Brian Lawson has spent the first two practices with the No. 1 defense at nose guard. With Mike Krause out for the season, Lawson was elevated from his backup spot on the depth chart. It's tough to tell how exactly he's been doing because the Huskies still haven't worn pads, but he definitely looks bigger than last season. Ron Newcomb served as Lawson's backup.

So Coach Kill, what do we do now?

Asked how much the team will have to improve before going up to Wisconsin, Kill said, "About 990 percent." So apparently the Huskies are about 10 percent there on a 1,000-point scale.

Quotable: "If you get comfortable, you get fired." Kill on his comfort level in his second season.