Share All sharing options for: NIU Huskies exorcize the WIU Leathernecks with 41-7 victory

Whew.  This game started off a little scary with RB Me'co Brown fumbling on the first possession, but they got the ball back right away as Western Illinois fumbled on their own.  RB Chad Spann then scored the first of his 3 TDs for the game.

On the next possession by WIU, QB Matt Barr drove his team down the field for 76 yds and a TD.  The game would be tied 7-7.  Immediately, I was thinking that this was 2002 or 2007 all over again against a lower division team.  However, that is the closest Western would get in this game.

A healthy serving of Spann and Brown was exactly what the Huskies needed.  On the ground NIU ran the ball for 244 yds and 3 TDs.  They never looked back and put 34 straight points on the board.

QB Chandler Harnish was extremely efficient going 10 of 14 for 143 yds and 2 TDs.  At halftime, he was a perfect 7 of 7 for 98.  He spread the ball around to 8 different receivers.  K Mike Salerno hit 2 FGs and still hasn't missed anything this season.

The defense woke up and began to dominate Western, limiting them to only 223 total yards.  The 'Necks only gained 55 yds in the 2nd half of the game.  The big uglies over there on the defensive side of the ball seem to be growing up fast right in front of our eyes.  This Northern Illinois team is so young and talented, it's ridiculous.

The game was over when...

...Chandler Harnish threw to TE Jason Schepler for a TD that put the Huskies up 28-7 before halftime.

As for injuries, FS David Bryant was held out just as a precautionary measure with his ankle.  Everybody else made it out healthy.  Me'co Brown's thumb injury is making him drop the ball, but that's about it.  Ricky Crider even saw a garbage time carry as he has been out with a hamsting injury.

All in all, a tremendous game by the Huskies.  They really corrected some mistakes from the Wisconsin game.  Excuse me, I'm going to turn on the Purdue-Oregon game right now.

After struggling with the Leathernecks for years, Northern Illinois finally defeats the boys from Macomb.  Handily.  Somewhere, former Huskie Coach Joe Novak has this expression on his face: 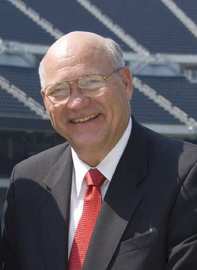