NIU to face the Minnesota Golden Gophers (again) in 2010

Share All sharing options for: NIU to face the Minnesota Golden Gophers (again) in 2010

And...there you have it.  Our out-of-conference schedule for next year is as follows:

Not a bad OOC schedule.  NIU and Iowa State have had good battles in the past (2003-04) and are as beatable of a BCS team as you can get.  North Dakota is a nice appetizer before we go in to Big 10 battle against our in-state rivals. 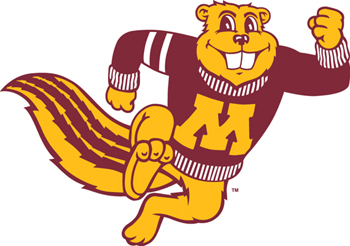 Minnesota has their new on-campus TCF Bank Stadium and I was looking for an excuse to go visit it...now I have one.  Still waiting on the payout number, because having 3 roadies against BCS squads is always a tough pill to swallow.  This is a one-and-none deal.  No return stops for the Goophers.  Wouldn't playing in Dekalb be a little attractive to Minny?  Or do they just want to shell out all that cash they just made from season-ticket sales?

"It's one of those things that when you look at the kinds of things we want to do, we ran into a problem where we would have loved to have another home game but until we could return a game, that would have been tough," Compher said. "Next year we had a hole to fill. We figured it would have been 2014 we estimated before we could have returned a game.

As I've noted before, the Huskies are on the up-and-up, while ISU is always bad and Minnesota could likely slide next year after losing a ton of their defense plus WR Eric Decker on offense.

This will be a good revenge game for QB Chandler Harnish and the Huskies after losing to Minnesota in the 2008 season opener 27-31 late in the 4th quarter.  As for now, this is the anthem for next year: