The Boilermakers enter the Boneyard

Share All sharing options for: The Boilermakers enter the Boneyard

The boneyard is a fixture in the Huskie locker room representing the biggest victories in NIU's history:

Just past the door the players normally enter is "The Boneyard." The white fixtures in the shape of bones are affixed to the walls complete with scores such as "NIU 19, Alabama 16" and "NIU 20, Maryland 13" from 2003 serve as reminders of the biggest wins of the program’s history.

Six years was way too long of a break between boneyard triumphs.  So says Harnish, who was a freshman in high school at the time of the last one:

They call them "boneyard" victories, triumphs over BCS conference schools, and Northern Illinois hasn't had many.

"It's a speechless feeling," NIU quarterback Chandler Harnish said. "We haven't had a boneyard victory in a while."

Since there are no pictures available of this phenomenon, I'm going to assume that these are actual bones taken from the unfortunate players from BCS schools that Huskies tend to prey on.

"You really don't get nervous on it until they line up and you see 'Oh, [wow] we got the look we want.' That's when you get nervous on the whole thing," said NIU defensive coordinator Tracy Claeys, who was in on the fake punt discussion with [Jay] Sawvel and Jerry Kill.

Despite being NIU's leading rusher in 2007, Justin Anderson has been embracing his role as a team player:

"To be honest, I'm thankful for the opportunity," Anderson said. "I've been on the punt team for a couple of weeks now. It's something new. I'm thankful for coach Sawvel putting [the fake] in."

"Any player would rather do more," he said. "Me and coach Kill, we've bumped heads about it. But I know my role and I'm going to play my role. Whenever they call on me, if they call on me, I'm ready. But I'm a team player. I'm all for my guys. I'm not jealous."

"I was just trying to give those kids from Indiana a chance," Anderson said. "I was talking with [Onyebuagu]. He was saying [Purdue] wanted him to walk-on and they didn't give him a scholarship and he didn't like that. I kept telling him 'Are you ready? I'm going to get you a win.' "

Coach Kill gets a helmet sticker for this play-call, even though he doesn't wear a  helmet.  THANKS GRAHAM WATSON.  He also got a "Paper" award from Mid-Major Madness.

Other than that fake...

The special teams was pretty brutal.  K Mike Salerno missed an easy 25-yarder, where it looked like the snap and ball placement was a little off.  Obviously we need to improve our punt coverage as Purdue returned one for the house on that first one.  I know that P Josh Wilber has a lot of pain in his foot, but he has to get better than a 35.6 average and get more balls inside the 20 yd line.  Hope he can bounce back big next week.  Our punt return game is pretty boring as well, but I don't know you go about fixing that so much.

15 of 26 for 174 yds and a TD.  That's classic efficiency there for a Huskie QB.  Chandler Harnish's only mistake was when he tried to force a ball in to a reciever and it got tipped in the air and picked off.  It was a nice thing to see him hooking up with senior WR Marcus Lewis for once.  Lewis seems to be Chandler's main target through these early games.  Willie Clark didn't play for some reason and I wasn't too impressed with Landon Cox.  It seemed like he could have had a couple extra catches in this game.  Either that or Harnish was JUST off throwing to him and a couple other guys.  Most of the throws were broken up by good plays on Purdue's defense however.  TE Reed Cunningham may become a redzone threat not unlike Spann as his 1 catch was for a TD.

RBs Me'co Brown & Chad Spann were just sick again.  Nobody can stop these guys.  Brown won MAC West POW for his performance.  26 for 150 and a TD for #8.  18 for 80 and 2 TDs for #28.  Spann has SO much power.  You think he'd down and the next thing you know he's in for a TD.  Had a weird fumble early on though that nobody caused.  Credit the line for opening up MONSTROUS holes for both of these players to run through.  Spann is now only behind Cal RB Jahvid Best for most TDs scored in the country with 7.  Best has 9, including 5 vs Minnesota this past weekend.  Brown is #14 in the nation in ypg with 110.33.

Oh and don't forget about the tremendous pair of fullbacks that we have in Kyle Skarb & Connor Flahive!

The defense pretty much stacked the box trying to stop Ralph Bolden, so the secondary really needed to step up and they did big-time.  It was very impressive how CBs Chris Smith and Patrick George were able to stay with their receivers step-by-step.  Davis Bryant had a nice return at FS and SS Tracy Wilson keeps piling up the tackles with 8 in this one.  Kiaree Daniels was impressive as well.

It seemed like they let Purdue run wild, especially late in the game.  On Purdue's last drive, Elliott threw the ball to a receiver, the receiver then proceeded to lateral the ball back over some guys head.  The refs somehow called an incomplete pass.  Truly one of the most ridiculous calls I have ever seen in my life.  Then as the clock was winding down...

Can you say CHEAP SHOT???

Hope, you got some 'splanin to do:

"I'm sure it's going to be brought up and we'll address it. I didn't see anything that happened to that injured player that made me think it was foul play. I don't think Zach Reckman should've jumped in there on that guy at the end of the play but maybe he was hoping the ball would come out. He was trying to find a way to win."

Injury updates: Linebacker/Kick returner John Tranchitella missed the game with a knee injury he suffered against Western Illinois. He likely will be out for a few weeks. Tight end Jason Schepler left the game in the second quarter with an elbow injury. Right guard Joe Pawlak left the game in the fourth quarter with an ankle injury. More will be known on Schepler and Pawlak this week.

Also, DE Jake Coffman was shaken up towards the end of the game for a while.  No word if it is anything serious.  Me'co Brown was also sick with the flu, but turned out a great performance:

"I felt terrible," Brown said. "I went out there the night before, Friday when we made it up there and my stomach, I wasn't feeling too good. I was coughing real bad. [Running backs] Coach [Rob] Reeves told me 'Michael Jordan played sick and you can do the same.' It looked like at the end of the day it came to be something good." 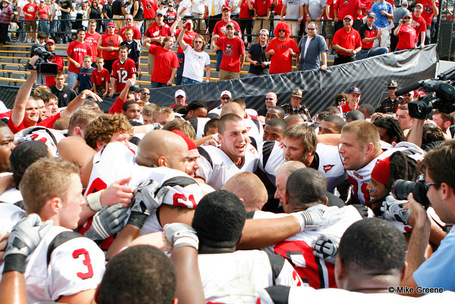 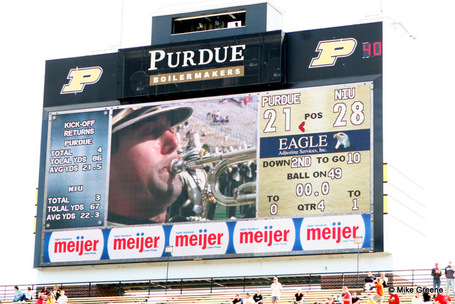