Share All sharing options for: Idaho Vandals vs. Northern Illinois: A Primer

Sure you may have seen enough crappy commercials like this one that Idaho and Potatoes are synonymously ingrained in your mind through years of torture.  But not in Moscow, located in the Northern part of the state.  I thought Moscow was in Russia?  Oh well.  They pride themselves on producing WHEAT, PEAS & LENTIL my friends.  Much unlike those smurf-turf freaks down south in Boise, who feast on spud like it's birthday cake.  Don't piss an Idaho fan off, they're called Vandals for a reason.  (Note: Idaho's fans are actually some of the most welcoming in the nation). 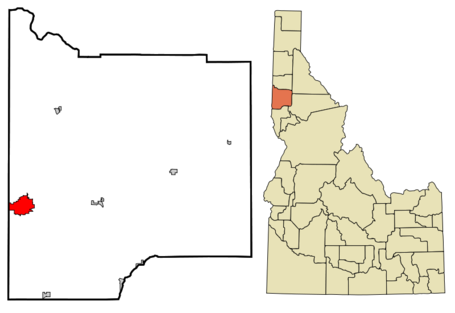 The distance from Moscow, ID to Dekalb, IL?  Just over 1,400 miles.  They're in an Eastern Michigan-esque situation as Washington State is only less than 10 miles the west of school in Pullman.

So far this season

In 3 redzone opportunities, NMSU squandered away whatever chance they had by fumbling, missing a FG and throwing an INT.  NMSU almost outgained the Vandals putting up 342 yds to Idaho's 350.  The Aggies are arguably the worst team in the WAC.  Their only win was a 21-18 squeaker over FCS Prairie View A&M.

Washington was ahead early by a 35-9 margin (three field goals) and the Vandals scored most of their points in garbage time.

SDSU gave Idaho the ball early for a pick-6.  Soon after that, they fumbled the ball inside their own 20, giving the Vandals an easy FG .  SDSU just got killed by 9 penalties for 85 yards, including two pass interference calls in the same Idaho drive that put the Vandals up 27-13 in the 4th.  Score was 20-27 with less than 3 min left in the game.  The Aztecs are the 2nd worst team in the MWC.  Their only win was a 35-19 win over a very bad FCS team in Southern Utah.

The season's only 3 games in, but Idaho has played low-ranked peers such as NMSU & SDSU.  This is the best their stats are going to look the entire season:

Offense - Meh.  Middle of the pack in nearly everything.  It's obvious they try to throw the ball around as they are averaging just over 253 ypg in the air.  That's 2nd in the WAC behind Hawaii.

Defense - Their highly ranked rushing defense is a little eschewed because SDSU & Washington like to throw the ball around, while NMSU's offense just sucks overall.  Their pass eff D is brutal and Harnish should be able to pick his spots all day.  This makes sense, because they get next to zero pressure on the QB or anybody in the backfield.

Special Teams/Other: Coach Kill talked up their punter in the press conference, but there is nothing to show that in the stats.  Their 12th ranked turnover margin is a big reason why they have won 2 games so far this season.

At RB it looks like 3 guys can tote the rock, similar to the situation that we had last year with everybody getting some touches.  The transfer from Wazzu in Woolridge is a bowling ball at 5'9" 241 lbs and their redzone threat with 4 TDs.  Jackson can do everything at 5'8" 190 and McCarty is the speed guy at 5'8" 174.

On defense, their main playmaker is Free Safety Shiloh Keo.  It's important that we account for him at all times either running the ball or passing.  Linebackers JoJo Dickson and Paul Senescall seem to be servicable as well.

On special teams, K Trey Farquhar has a bunch of points, because it seems like the Vandals can't punch it in to the end-zone a lot of the time when they are in the redzone.  He missed 2 against SDSU in the Kibbie Dome last week.

It doesn't seem like Idaho's defense warrants any type of scare, so Kill is going to run straight at the Vandals until they stop us.  Like Purdue, the biggest asset for the Vandals is their offense and we want to keep those guys on the bench.

If they decide to go balls out stopping the run, then Harnish will have all day in the pocket to pick his spots in Idaho's secondary.  i actually hope this happens because its always good to get our passing game tuned up for WMU next week.