Where have all the fans gone?

Share All sharing options for: Where have all the fans gone?

One of the most disturbing statistics was the attendance of only 16,320 on Saturday against the Idaho Vandals.  That may seem like a harmless number, but it's actually the 5th lowest attendance number in the last 8 years!

Here is a list of the only recent attendances that had less:

That 2002 KSU game is probably as similar as you can get to what happened this past weekend, continuing the fascination that I have making comparisons between those two squads.

This is madness!  We just beat the Purdue Boilermakers, people should be jumping up and down to get in to Huskie Stadium.  Right?

Well sort of.  This game is sort of the black sheep of all the home game that we are going to be playing this year.  First of all, Idaho by name itself is not going to have any sort of a draw.  We already worn ourselves out rooting for the Huskies against FBS Western Illinois just a couple weeks ago.  Let's get some better talent here in Dekalb.  The Vandals were sandwiched right in between WIU and the combo this week of Homecoming/Conference Opener against the Western Michigan Broncos.  People had to schedule a weekend to make one of these games and the choice obviously wasn't this past weekend.  Homecoming was very early this year.

I think that there could be a much deeper root to this problem, because this never would have happened a couple years ago.  It's not like the students had anything better to do other than watch a Huskie football game on Saturday.  Where were the fans on Saturday?  The answer is: They graduated.

Yes, graduated.  This new generation of Northern Illinois Huskie fan simply doesn't know what success tastes or feels like.  Take a look at this graph.  The student that saw the biggest successes of this NIU football program graduated after the 2004-2006 seasons.  Since then, the winning % for 4-year blocks of students have been decreasing, obviously hampered by the 2-10 season in 2007. 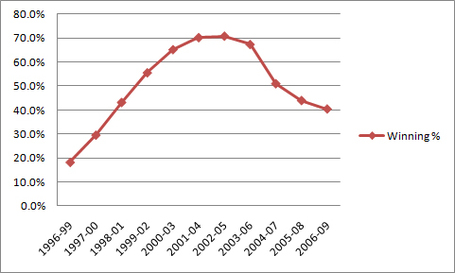 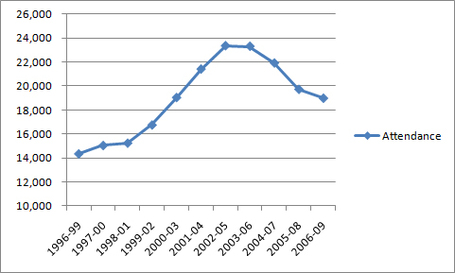 I also want to note that the 2006-09 numbers aren't static and take into account the first 2 games of the season so far.  If you ask me, it seems like there is a resurgence just waiting to take place in this football program.  We've got the coaching staff, we're trying to stock up on quality players and the wins are going to come.  It won't be as hard this time, because we've already done it in the past.  Right now just going off the chart we currently seem to be a hybrid of the 6-5 2001 team and the 8-4 2002 team.  Time will tell how much we can get our winning % and attendance numbers up throughout the course of the 2009 season.

It should be very, very interesting to see how many people pack Huskie Stadium this weekend for Homecoming.  I literally have no clue what kind of turnout to expect.

On a side note, Dear 2006 graduates: You guys suck. Not only did you experience NIU being nationally ranked, you experienced a bowl win and a trip to the MAC Championship game. Not to mention you got to see two years of Michael Turner and then two years of Garrett Wolfe. I wish I was on campus for that magical span of time in Northern Illinois football history.  Plus you guys had a decent job market to jump into right after graduation.