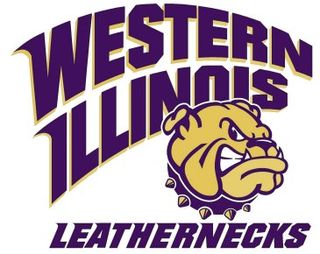 When the NCAA expanded from the old eleven game schedule to the new twelve game schedule, 1-AA (now FCS) football became somewhat more relevant on the big time college football landscape. Don't believe me, just ask Michigan for their thoughts on Appalachian State (too soon?). I consider myself a knowledge college football fan and take pride in not sounding like an idiot while trying to act like I know what I am talking about, and that is exactly why I am not going to provide an in depth preview of WIU. The fact of the matter is, I just do not know that much about them. However, I am here to tell you why NIU should not take them lightly on Saturday night.

First of all, let me tell you everything I do know about Western Illinois' football team. Their nickname is the Leathernecks, they play in Macomb, they have an athletic QB, Frisman Jackson transferred there from NIU, they upset us earlier this decade, and they are receiving votes in this week's FCS poll. That's all I got. They defeated Sam Houston State (high five to anybody who can name one player on that team) 35-28 in their opening game. From the looks of it, they have a pretty talented offense, or SHSU's defense is really bad. 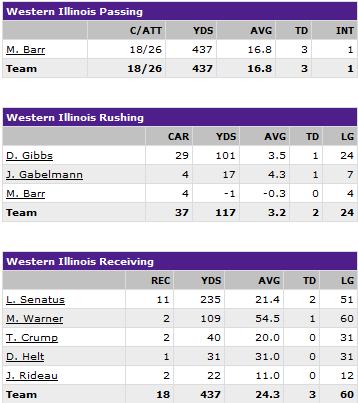 After being lit up by Scott Tolzien, Matt Barr's numbers scare me somewhat from their first and only game this season. However, digging deeper Barr was pretty pedestrian during his first two campaigns in Macomb. His career completion percentage was in the low 50% range, and his TD/INT ratio was 13/11. He is not exactly Nate Davis back there. If there is one thing I can conclude from the box score it is that NIU has to limit the big plays in the passing game. Tolzien burned the combination of Patrick George and Mike Sobol for an eighty yards touchdown, and Lito Senatus and Matt Warner both had long catches last week. Sam Houston State's defense scored two touchdowns last week (and pick six and a scoop and score), so the Huskies D may be due for a couple more takeaways this weekend.

This ends the relevant statistical and personal breakdown of the preview, but there are other reasons why the Huskies can not take the RedLeathernecks lightly on Saturday.

Now, to be fair, the 2002 version of the Leathernecks were really good. They went 11-2 that season and their only losses were to (Jerry Kill-led) SIU and Western Kentucky by a combined five points. The 2007 version of the Southern Illinois Salukis went 12-2 in Kill's last year there and lost to Joe Flacco and Delaware 20-17 in the FCS semifinals. NIU was well, bad, that year and went 2-10. WIU is not predicted to be as good as they were in 2002, nor will NIU be as bad as they were in 2007 (at least we all hope not). However, Western only went 6-5 last year and still gave Arkansas all they could handle. This is from the poster Western_101 in the Dog Pound, Western plays their FBS opponents pretty close.

Wow, I would expect WIU to cover the spread. Over the last 10 years WIU has played 11 FBS teams (of those 5 were BCS) the average points allowed for WIU is 32.5, average points WIU has fielded is 18.5.

This brings me to my next point, I hate the idea of playing good FCS teams. If we are going to play teams from a lesser division, I would just prefer to play Indiana State every year and take our free win. Look at last year, what happens if we play a team like Southern Illinois, Villanova, or Appalachian State and lose? Instead of finishing 6-6 and going to the Independence Bowl, you finish 5-7 and have an embarrassing loss to an FCS team on your resume. At the end of the day, nobody cares how good the FCS team you lose to is. Whether it is Wofford or Sam Houston State, an FCS loss as an FCS loss and it is equally embarrassing. Playing a quality FCS opponent for a MAC school is just dumb scheduling to me. It is a lose-lose situation and nothing good comes out of it. Schedule Indiana State, take your free win, and move onto Purdue. Iowa and East Carolina were both nearly burned by scheduling Top 25 1-AA teams, and Temple lost to one.

With all that being said, this is a game the Huskies should win. They are the more talented and better team, and if they are not then it was going to be a long season anyways. Lets hope it is not.