Can Northern Illinois "Kool" off the Western Michigan Broncos at home?

Share All sharing options for: Can Northern Illinois "Kool" off the Western Michigan Broncos at home? 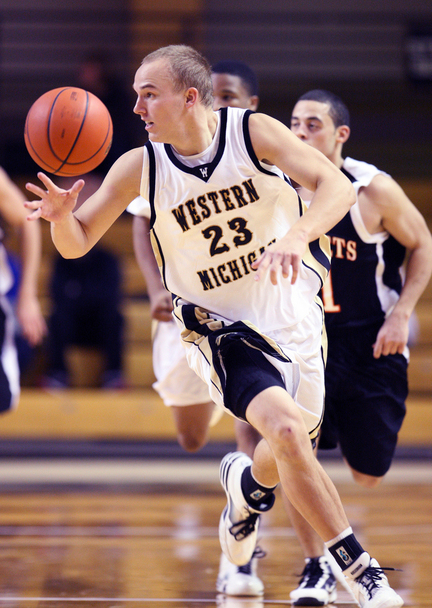 WMU's David Kool is like one of those horror movie serial killers that just won't die.  He's been around forever and is effective no matter what you try and do.  He's lead the Broncos to a 5-game winning streak including a 61-47 defeat of EMU at home.  It's early, but both the Huskies and Broncos are on a collision course that may decide the MAC West conference race.  Four factor stat breakdown and more after the jump.

This chart is a little off, because the Broncos put a 86-45 beatdown on NAIA Michigan Dearborn before conference play started that counted in to their stats.  Taking out that game, the offensive rebounding stats for both teams against D-I competition is 37.4%, which ranks in the top-50 nationally.  Grabbing boards inside is clearly going to be the biggest battle in this game, with no clear leader in defensive rebounding either.

Sean Kowal will have to keep the 6'10": 243 lb Senior Donald Lawson off the boards as much as he can.  Lawson leads the Broncos by rebounding 14.2% of the shots missed on the offensive end (62nd in the nation).  Michael Fakuade will also have his hands full on the inside guarding Flenard Whitfield, a 6'7" Soph that not only has an 11.7 OR%, but also takes 25.4% of WMU's shots and scores 10.4 ppg.

Both teams are effective on the offensive end, but WMU gets the nod because of their tougher SOS.  The Broncos have 4 wins over Top-200 teams, whereas the Huskies have zero.  The Broncos are slightly better on the defensive end and both teams have the same tempo.  Turnover % isn't a main concern, because WMU only ranks 272nd in forcing the issue.  If the Huskies can come close to what they did against Ball State, they should be fine there.

While the Huskies have been getting to the line at a ridiculous rate lately (Xavier Silas 15 for 15 vs BSU!!), the Broncos don't seem to foul much.  They rank 20th in the nation in not letting their opponent get to the FT line.  Don't know if that means much, because it seems like X is hellbent for destruction every time he drives the lane.

WMU doesn't get to the line much, but when they do they shoot a stellar 74.4% as a team, led by David Kool's 72 of 80 for 90%.  Senior Martelle McLemore is another dangerous player on the offensive end scoring 11.8 ppg, but he rarely gets to the line.

Kool does everything so flawlessly and leads the team with 19.8 ppg, 2.8 apg & 1.9 spg.  He also shoots 37.8% from 3-point land.  He'll even pickup the ball at the point a la Jake Anderson and deliver the ball around the court.  There's no stopping him, you can only hope to contain.

This game won't be pretty and the team that plays best in the paint will take this one.  Jake Anderson is the player to watch in this one, as he needs to continue grabbing rebounds and drawing fouls to put the Huskies over the top.