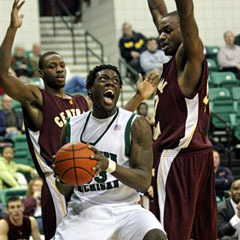 Brandon Bowdry will eat your babies

Could the Huskies make it 5 straight wins?  3-0 in conference?  EMU Center Justin Dobbins finally made his comeback against Toledo Wednesday after missing the majority of the season with a leg injury.  Western Michigan did manage to beat Eastern 61-47, but that was before the three-headed Eagle monster of C Dobbins, F Bowdry & PG Carlos Medlock got back together again.  We'll look at how the Huskies will try to stop this attack after the jump.

The best (read: only) advantage that the Huskies have over Eastern Michigan is on the offensive boards.

The only problem is that EMU is 66th in the nation in defensive boards, led by 6'6" Junior F Brandon Bowdry.  He ranks 4th in the nation rebounding 28.6% of all missed shots on the defensive end.  That's just insane.  Bowdry takes 30% of the shots and is good for 18.5 ppg and 10.5 rpg.  Not to mention he is also one of the top players in the nation in drawing fouls.  Lee Fisher and Najul Ervin will get their chances guarding Bowdry.

While Bowdry's owning on the defensive boards, 6'8" Senior C Justin Dobbins will be roaming around looking to block shots and be efficient on the offensive end, grabbing some boards here and there.  Filling in for Dobbins has been 6'10" Freshman Matt Balkema who weighs in at a whopping 270 lbs.  Sean Kowal will have to have as good of a game as he had against WMU if we want to win this one.  Michael Fakuade will be roaming picking up bodies and hoping not to foul out again.

6'0" Senior PG Carlos Medlock is basically a more polished version of Mike DiNunno.with 14.3 ppg and 3.7 apg.  It will be interesting to see which point guard will come out on top: The upstart young player in Mikey D or the crafty 5th year veteran in Medlock.  The Eagles like to take a lot of 3-pointers (47th in attempts), but they only average 30.5% from the arc as a team.  Watch out for 6'6"Jay Higgins on the wing shooting 34% from outside.

It will be a very close game in all aspects and the Huskies will be forced to use a bigger lineup than usual.  The big men inside will have to contain Bowdry and not let him control the whole pace of the game.  If the Huskies can stay out of foul trouble then I think the home court advantage puts the Huskies over the top.  It will be a true test as EMU has one of the top frontcourts in the entire MAC.  Huskies 73, Eagles 71