Share All sharing options for: It's Official: P.J. Fleck heads to Rutgers 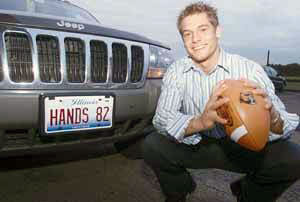 Denial: This can't be happening!  P.J. Fleck exemplifies what being a Huskie is all about.

Anger: Throws Huskie stuffed animal across the room, tears down NIU flag.  He was forced out!

Bargaining: Just give him one more year Kill!  Increase his paycheck Compher!

Depression: What are we going to do without Fleck?  How will the Huskie traditions be upheld?  Who's going to be our recruiting coordinator now?  Who will coach our WRs?  We're going to lose all our recruits!

Acceptance: Let's get real here.  P.J. Fleck has been at Northern Illinois forever sans his pit-stops to play for the 49ers and to GA at Ohio State.  Recently I named him Huskie of the Decade on this very site right before New Year's.  Coach Jerry Kill didn't have to hire him to keep on as an assistant when he took the job in 2008, but he did.  Keeping P.J. meant keeping a huge piece of the old NIU guard and promoting it.

For the last two years, Fleck has not only been the WRs coach, but has also been the recruiting coordinator for the Huskies.  Last year's class was one of the best in years and the class to be signed in two weeks looks promising as well.  I hope that the players and recruits see that this truly is a great opportunity for P.J. as he has dedicated so much to this school in his time here.

Just ask anybody who sat around during a Spring or Fall practice.  You could clearly see (and hear!) P.J. Fleck's presence on the field at all times.  His energy and enthusiasm is unmatched and many see big things in his future, including himself:

"It's a chance to prove myself away from Northern Illinois and set myself for the future," the 29-year-old Fleck said. "I need to make a move like this to become a head coach one day."

Rutgers is always on the up and up and Greg Schiano is a tremendous coach.  Moving up to the Big East, Fleck will likely make 50K more than his current 70K salary.  For more on coaching salaries, check out this site.  It's not just about the bottom line though.

He has to expand his horizons, meet more great minds just like his and we're all happy for him and his family:

"The guys took it hard. I took it hard," Fleck said. "I told them that you have to understand that when you have a family, you have to do what's best for your family. Sometimes it's going to hurt someone else and this is that time. ... It was probably the most difficult thing I've ever had to do."

Thank you for your service, P.J.  Make sure to keep us in mind when we eventually have to hire a new head coach.

As for his replacement, current TEs coach Bryan Anderson coached the WRs at SIU.  BUT, I'd rather see Kill make an hire outside of his merry band of assistant coaches for once.